Mermaid Moon by Colleen Coble - Review and Giveaway (from Litfuse) 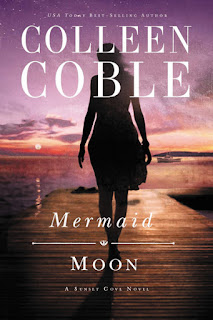 Synopsis:
Mallory’s mother died fifteen years ago. But her father’s last words on the phone were unmistakable: “Find . . . mother.”

Shame and confusion have kept Mallory Davis from her home for the last fifteen years, but when her dad mysteriously dies on his mail boat route, she doesn’t have any choice but to go back to Mermaid Point.

Mallory believes her father was murdered and childhood sweetheart Kevin O’Connor, game warden in Downeast Maine, confirms her suspicions. But Kevin is wary of helping Mallory in her search. She broke his heart—and left—without a word, years ago.

When Mallory begins receiving threats on her own life—and her beloved teenage daughter, Haylie—their search intensifies. There’s a tangled web within the supposed murder, and it involves much more than what meets the eye.

As answers begin to fall into place, Mallory realizes her search is about more than finding her father’s killer—it is also about finding herself again . . . and possibly about healing what was broken so long ago with Kevin. She just has to stay alive long enough to put all the pieces together.

What did I think of this book:
This was a nice addition to this series. I enjoy that it was full of suspense. So much so that I found myself not wanting to put the book down. Then there is a little romance thrown in which makes the book that much better. I like how the author keeps us in suspense until the end of the story. Her writing style makes the story flow nicely and the characters were well developed. I like that Claire from the first book was brought back as a friend of Mallory's. I felt for Mallory as she had a lot of trauma in her life that she had to deal with. It was also nice to see how Mallory and Kevin's relationship developed throughout the story. I am looking forward to the next book in this series.

To move forward past a life of shame and confusion, Mallory Davis must go back to Mermaid Point to find out who murdered her father in Colleen Coble's new book, Mermaid Moon. As answers begin to fall into place, Mallory realizes her search is about more than finding her father’s killer—it is also about finding herself again . . . and possibly about healing what was broken so long ago with Kevin. She just has to stay alive long enough to put all the pieces together.

Celebrate the release of Mermaid Moon with Colleen and a mystery e-reader prize pack giveaway!

One grand prize winner will receive:
Enter today by clicking the icon below. But hurry! The giveaway ends on February 1st. The winner will be announced February 2nd on the Litfuse blog.