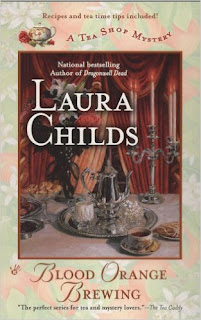 Synopsis:
When social darling Delaine Dish throws a lavish benefit for the restoration of a run-down Victorian home, Theodosia Browning donates tea and treats from her Indigo Tea Shop. But the grand unveiling of Theo's spread proves a gruesome scene when a beloved local politico falls dead with a jagged piece of metal in his neck. Anyone at the event could be the culprit, but the police have few leads -- and no suspects. Try as she might, Theodosia can't help but wonder who the murderer is. But her investigation will lead her into places darker than the blackest tea...

My thoughts:
This addition of the tea shop mysteries was a little more heart wrenching for me. It involves animals and that always touches a soft spot with me. In this story Delaine was not near as annoying to me. I think it is because she was busy and people were actually putting her in her place this time. She did have a big part in this book. Haley was still a person I could not like. She is rude and immature with the things she says and does. I am so glad that we got to see more of Parker in this one and I hope that he and Theo continue to get closer. We also got see a lot more of Earl Grey this time around which is a big plus. I thought I had the murder all figured out then one of the suspects I had ended up murdered so that left two more. Then at the end the author thew me for a loop and I realized I had it all wrong. Another great addition to a fun series.

About the author:
Laura Childs is the New York Times bestselling author of the Tea Shop Mysteries, Scrapbook Mysteries, and Cackleberry Club Mysteries. In her previous life she was CEO/Creative Director of her own marketing firm and authored several screenplays. She is married to a professor of Chinese art history, loves to travel, rides horses, enjoys fund raising for various non-profits, and has two Chinese Shar-Pei dogs.

The Tea Shop Mysteries - set in the historic district of Charleston and featuring Theodosia Browning, owner of the Indigo Tea Shop. Theodosia is a savvy entrepreneur, and pet mom to service dog Earl Grey. She’s also an intelligent, focused amateur sleuth who doesn’t rely on coincidences or inept police work to solve crimes. This charming series is highly atmospheric and rife with the history and mystery that is Charleston.

The Scrapbooking Mysteries – a slightly edgier series that take place in New Orleans. The main character, Carmela, owns Memory Mine scrapbooking shop in the French Quarter and is forever getting into trouble with her friend, Ava, who owns the Juju Voodoo shop. New Orleans’ spooky above-ground cemeteries, jazz clubs, bayous, and Mardi Gras madness make their presence known here!

The Cackleberry Club Mysteries - set in Kindred, a fictional town in the Midwest. In a rehabbed Spur station, Suzanne, Toni, and Petra, three semi-desperate, forty-plus women have launched the Cackleberry Club. Eggs are the morning specialty here and this cozy cafe even offers a book nook and yarn shop. Business is good but murder could lead to the cafe’s undoing! This series offers recipes, knitting, cake decorating, and a dash of spirituality.
Posted by Angela - Bookaunt at Wednesday, December 07, 2016