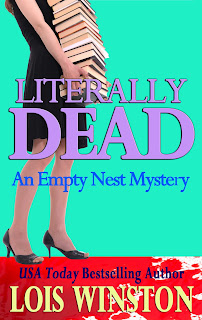 Synopsis:
After her last disastrous episode as an amateur sleuth, Gracie Elliott is back. The budding romance writer has spent the past year crafting her first novel. Her hard work and determination pay off when her manuscript wins the Cream of the Crop award, a contest for unpublished writers, sponsored by the Society of American Romance Authors. First place entitles her to attend the organization’s annual conference, normally open only to published authors.

With husband Blake in tow, a starry-eyed Gracie experiences the ultimate fan-girl moment upon entering the hotel. Her favorite authors are everywhere. However, within minutes she learns Lovinia Darling, the Queen of Romance, is hardly the embodiment of the sweet heroines she creates. Gracie realizes she’s stepped into a romance vipers’ den of backstabbing, deceit, and plagiarism, but she finds a friend and mentor in bestselling author Paisley Prentiss.

Hours later, when Gracie discovers Lovinia’s body in the hotel stairwell, a victim of an apparent fall, Gracie is not convinced her death was an accident. Too many other authors had reason to want Lovinia dead. Ignoring Blake’s advice to “let the police handle it,” Gracie, aided by Paisley, begins her own investigation into the death. Romance has never been so deadly.

About The Author
USA Today bestselling and award-winning author Lois Winston writes mystery, romance, romantic suspense, chick lit, women’s fiction, children’s chapter books, and nonfiction under her own name and her Emma Carlyle pen name. Kirkus Reviews dubbed her critically acclaimed Anastasia Pollack Crafting Mystery series, “North Jersey’s more mature answer to Stephanie Plum.” In addition, Lois is an award-winning craft and needlework designer who often draws much of her source material for both her characters and plots from her experiences in the crafts industry.

Have you ever lost a job? I suppose most people have at one time or another, but for me it was a new—and totally shocking—experience. I had worked for the same company my entire adult life until the morning I arrived at the office to find my career had been outsourced to a Third World nation.

I don’t work in customer service, billing, or tech support. I’m a textile designer. How could this happen? Who ever heard of outsourcing creativity? Did the Pope outsource The Sistine Chapel to a call center in India, handing them a paint-by-numbers cheat sheet from which to work? No, he hired one of Italy’s premier artists to create one of the world’s great masterpieces.

Then, as if losing my job weren’t enough, to add insult to injury, I learned I was also losing my pension, thanks to some underhanded financial skullduggery. Talk about a double-whammy!

What do you do when you’re middle-aged, out of work, and have two kids in college? After going through the five stages of grief—and also wondering why I had to fall in love with a college professor instead of a trust fund baby—I pulled up my big girl pants and set out to look for another job, only to learn no one was interested in hiring a forty-something fabric designer.

The only solution was to turn entrepreneurial and create a new career for myself. My first foray (documented in Definitely Dead by Lois Winston), was Relatively Speaking, a matchmaking service for senior citizens. What I really wanted to do was write romance novels. Relatively Speaking afforded me plenty of time to pen my future bestsellers because my clients needed several hours each morning to find their teeth, lube their creaky joints, and deal with GI necessities. They also always turned in shortly after the early bird specials each evening. What I didn’t anticipate was someone murdering Client Number Thirteen—and almost murdering me. So much for my fledgling business!

However, during the short time that Relatively Speaking existed, I was able to work on my novel and eventually finished it. I entered a writing competition and took first place, winning the prestigious Cream of the Crop Award. Maybe I didn’t need to find another business venture after all. My dream of becoming a bestselling romance author was about to come true. So I set off for the Society of American Romance Writers’ annual conference, fully expecting a bevy of editors to vie for my book. I had visions of them lining up to toss offers at my feet.

Unfortunately, something other than book contracts landed at my feet—literally. Another dead body. And not just any dead body but the body of Lovinia Darling, the Queen of Romance. Find out how I deal with this new crisis in my life in Literally Dead, the second book in the Empty Nest Mystery series