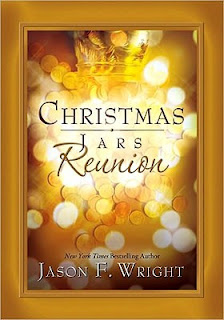 Synopsis:
The New York Times bestseller Christmas Jars has sold nearly 500,000 copies. Thousands of people across the country have emailed the author at ChristmasJars.com about how the Christmas Jars tradition has touched their lives either by receiving a jar or by giving one.

Hope Jensen's story continues in Christmas Jars Reunion. It s been two years since Hope was reunited with her biological mother on Christmas Eve at Chuck's Chicken n Biscuits. Hope has never felt more complete. She s writing full time for a family magazine and, with the help of her mother, Marianne, leading the Christmas Jars Ministry out of Chuck s quirky restaurant. To top it off, she's dating a marketing executive in a comfortable long distance relationship. Her life is right where she wants it to be a state of organized chaos as another Christmas rolls around. Then her world changes forever over Thanksgiving weekend. The Maxwells hire a nephew to take over the family furniture restoration business. Someone that Hope can't stop thinking about. Then an out of town stranger shows up at the diner asking to help in the ministry, a stranger whose motives are yet unclear. Before the sun sets on Christmas Day, two men will try to change Hope's life forever. In the process, Hope will be reminded of the immense power of a single jar, and the healing that sometimes comes only with forgiveness.

My thoughts:
I read the first book Christmas Jars and loved it so much that I had to read the reunion one. In this book we go back to Chuck's Chicken n Biscuits with Hope and her goal of giving away 1001 Christmas Jars. I enjoyed reading more about Hope and her life's journey. In this book we also get to meet some new people. Queen who is the best little girl and she will pull at your heart strings. Al who is does not know it but his life will be changing soon. And Clark who is a good guy who does not know where he fits in. Not only is this book about Hope's daunting task of giving away so many jars but about how people's lives are changed. It was every bit as touching as the first book. Very enjoyable and quick to read.

Jason is a columnist for Fox News, TheBlaze, Deseret News and the Northern Virginia Daily. Articles by Jason have appeared in over other 50 newspapers and magazines across the United States including The Washington Times, The Chicago Tribune, and Forbes. He is the author of The James Miracle (2004); Christmas Jars (2005); The Wednesday Letters (2007); Recovering Charles (2008), Christmas Jars Reunion (2009); Penny's Christmas Jar Miracle (2009); The Cross Gardener (2010); The Seventeen Second Miracle (2010); The Wedding Letters (2011); The 13th Day of Christmas (2012); The James Miracle: 10th Anniversary Edition (2014); and, Christmas Jars Journey (2015).

Jason is also a popular speaker who speaks on faith, the Christmas Jars movement, the Joy of Service, the lost art of letter writing and many other topics. He has been seen on CNN, FoxNews, C-SPAN, and on local television affiliates around the country.

Jason is originally from Charlottesville, Virginia, but has also lived in Germany, Illinois, Brazil, Oregon and Utah. In 2007, while researching Virginia's Shenandoah Valley for his novel The Wednesday Letters, Jason fell so in love with the area that he moved his family westward from northern Virginia to Woodstock. They've lived in the Valley ever since.

Jason is married to Kodi Erekson Wright. They have two girls and two boys.
Posted by Angela - Bookaunt at Saturday, December 31, 2016