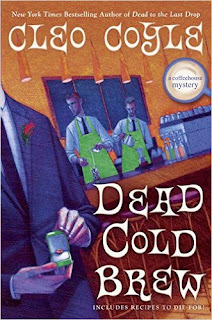 THE PERFECT PROPOSAL LEADS TO A CHILLING COLD CASE…

Coffeehouse manager Clare Cosi sheds tears of joy when her NYPD detective boyfriend surprises her with an engagement ring. But her bridal bliss is put on hold when a chilling mystery brings a wave of deadly danger to those she holds dear…

After everything Clare and Mike have been through, they deserve a little bit of happily ever after. So when Mike decides to put a ring on Clare’s finger, Clare’s eccentric octogenarian employer is there to help. She donates the perfect coffee-colored diamonds to include in the setting and the name of a world-famous jeweler who happens to be an old family friend. But while the engagement is steeped in perfection, the celebration is not long lived.

First, a grim-faced attorney interrupts their party with a mysterious letter bequeathing a strange, hidden treasure to Clare’s daughter. Next, the renowned jeweler who designed Clare’s ring is found poisoned in his shop. Both events appear to be connected to a cold case murder involving a sunken ship, an Italian curse, a suspiciously charming jewel thief, and a shocking family secret. With deadly trouble brewing, Clare must track down clues in some of New York’s most secret places before an old vendetta starts producing fresh corpses.

With recipes to die for, including how to make cold-brew coffee at home!

My thoughts:
Another great hit by Cleo. I have enjoyed each of the books in this series. It is so much fun to visit the coffeehouse and see what Clare and the crew are up to. This story has a lot going on. We had a shooter targeting cops, a jewel thief and a sunken ship. I have to say my favorite part of the book was the sunken ship story. I would have loved it if that was what the whole book was about. The characters are well developed and the story is a fast paced one. It was fun trying to keep everything straight for the different story lines. I liked how I thought I had it all figured out only to find out I did not - that is until the author revealed it all in the end. Then we have a bit of romance as Clare and Mike are getting closer to each other. I am happy to have had the chance to read this book and am looking forward to the next one.

About This Author
CLEO COYLE is the pseudonym for Alice Alfonsi, writing in collaboration with her husband, Marc Cerasini. CLEO COYLE grew up in a small town near Pittsburgh, Pennsylvania. After earning scholarships to study writing at Carnegie Mellon and American Universities, she began her career as a cub reporter for The New York Times. Now an author of popular fiction and New York Times bestselling media tie-in writer, Cleo lives and works in New York City, where she collaborates with her husband (also a bestselling author) to pen the Coffeehouse Mysteries for Penguin. Together Cleo and her husband also write the Haunted Bookshop Mysteries under the name Alice Kimberly. When not haunting coffeehouses, hunting ghosts, or rescuing stray cats, Cleo and Marc are bestselling media tie-in writers who have penned properties for NBC, Lucasfilm, Disney, Fox, Imagine, and MGM. In their spare time they cook like crazy and drink a lot of java. You can learn more about Cleo, her husband, and the books they write by visiting www.CoffeehouseMystery.com. 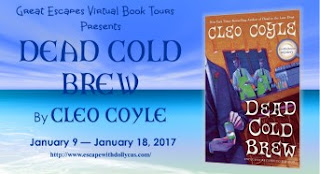