Scheduled to Death by Mary Feliz - Guest Post and Giveaway 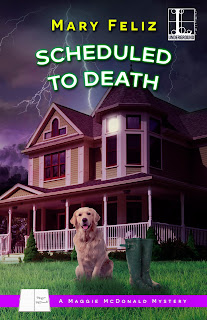 Synopsis:
Professional organizer Maggie McDonald has a knack for cleaning up other people’s messes. So when the fiancée of her latest client turns up dead, it’s up to her to sort through the untidy list of suspects and identify the real killer.

Maggie McDonald is hoping to raise the profile of her new Orchard View organizing business via her first high-profile client. Professor Lincoln Sinclair may be up for a Nobel Prize, but he’s hopeless when it comes to organizing anything other than his thoughts. For an academic, he’s also amassed more than his share of enemies. When Sinclair’s fiancée is found dead on the floor of his home laboratory—electrocuted in a puddle of water—Maggie takes on the added task of finding the woman’s murderer. To do so, she’ll have to outmaneuver the suspicious, obnoxious police investigator she’s nicknamed “Detective Awful” before a shadowy figure can check off the first item on their personal to-do list—Kill Maggie McDonald.

About the author:
Mary Feliz has lived in five states and two countries but calls Silicon Valley home. Traveling to other areas of the United States, she’s frequently reminded that what seems normal in the high-tech heartland can seem decidedly odd to the rest of the country. A big fan of irony, serendipity, diversity, and quirky intelligence tempered with gentle humor, Mary strives to bring these elements into her writing, although her characters tend to take these elements to a whole new level. She’s a member of Sisters in Crime, Mystery Writers of America, and National Association of Professional Organizers. Mary is a Smith College graduate with a degree in Sociology. She lives in Northern California with her husband, near the homes of their two adult offspring. Visit Mary online at MaryFeliz.com, or follow her on Twitter @MaryFelizAuthor.

You can win your own copy! Giveaway – On February 10, the author will be giving away five ebook editions of both books to randomly selected names on my newsletter list. Here is the link where your followers can sign up for the newsletter – http://www.maryfeliz.com/newsletter/

Guest Post:
What's a cozy?
"What is a cozy mystery?"
“It’s a murder mystery. Someone dies but no one gets hurt." I didn't invent that answer and I've forgotten who did, but I love it. It's succinct.

It might be too short, but it's safe. Once authors start to expound on the definition, sparks can fly. There may be as many strong opinions on the matter as there are cozy mystery writers, publishers, publicists, reviewers, and agents. Readers have their own preferences.

Characters drive the plot
My personal favorites are cozy mysteries with strong, likeable, but imperfect characters. I enjoy feeling I've made friends within a book's pages and have fun imagining what the characters do while I'm waiting for the next installment of their adventures.

I also like learning something new. Even in books I'd consider quick, light reads, I delight in discovering locations or professions I know little about.

Good guys win
An expanded definition of cozies might add that the story unfolds after the murder occurs and is about chasing clues and restoring justice. Good wins. Evil is thwarted.

So far, our description of a cozy is still pretty simple. Fine-tuning it further can entertain authors for hours, if not days or weeks.

Some authors, when asked to define the genre, provide rosters of requirements that might include:

• Setting is a small town with a limited number of characters.
• Part of a series.
• Avoids graphic sex, gore, and profanity.
• Sleuth is an amateur, often a single woman with a career that allows time to track down murderers.
• Nearly every character has a motive.
• Must have animals (and/or recipes or crafts).

Defying Description
Other people presented with such a list will immediately provide titles that are exceptions to the rules: Hercule Poirot operated out of a city, as did Tuppence and Tommy, and Nick and Nora Charles. Cozy characters have been known to swear when provoked. PD James and Louise Penny have been defined as cozy writers, but their protagonists are older men who are sworn officers of the law. Lord Peter Whimsey didn't own a dog.

Nearly everyone agrees that the ancestor of today's cozies is the English village mystery typified by Agatha Christie's Miss Marple and her home in St. Mary Meade. The mysteries marketed as cozies by my publisher, Kensington Books' Lyrical Underground, share elements of the classic mysteries of Ngaio Marsh, Josephine Tey, and Dorothy L. Sayers.

Mira, a division of Harlequin, publishes Laura Van Wormer, marketing her books as romantic suspense. To me, however, her books are cozies: English village mysteries that happen to take place in Manhattan within the confines of a Riverside Drive apartment building and a television news studio.

Kensington Lyrical Underground gave me a contract, which means they get to call the shots. And they've made Maggie's books cozies. Because Kensington knows its business, most cozy readers seem comfortable in the small town world that is Orchard View, filled with dogs and cats, a small group of friends, and a main character who is a professional organizer, a happily married mom, and an amateur detective with friends on the police force.

The eye of the beholder
But a Kensington cozy isn't the same as one from Berkeley Prime Crime, Midnight Ink, Henery Press, Minataur, or other publishers. And readers are the ultimate judges of what they want in their mystery fiction, cozy or not. With so many mystery readers and fans here, I'm curious about your preferences. Thumbs up or down on animals, crafts, and recipes? Urban, suburban, or rural setting? Are cozy characters allowed to marry? Can cozies share aspects of romantic suspense? Chick lit? Traditional mysteries? Is there a cozy character's career you're dying to read about? Let me know in the comments.

And if Maggie McDonald and Scheduled to Death (and the first book in the series, Address to Die For) sound like your cup of tea, visit my website and sign up for my newsletter at: http://www.maryfeliz.com/newsletter/ 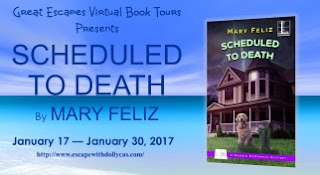