Time Out by Suzanne Trauth - Guest Post and Giveaway 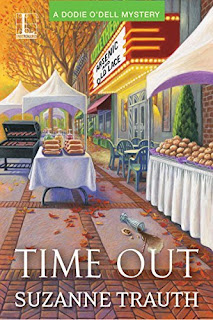 Synopsis:
The amateur actors at the Etonville Little Theatre may be known for chewing the scenery, but restaurant manager Dodie O’Dell has something more appetizing for them to sink their teeth into. She’s been taking bows in her small New Jersey town for her theme menus, designed to complement the local productions. This fall, the community theatre is staging Arsenic and Old Lace, set in 1940s Brooklyn, so Dodie is serving up hot dogs, Italian ices, egg creams, and knishes at the weekend food festival.

All is going well until Antonio Digenza, the ex-Off-Off-Broadway director of the show, dies dramatically while noshing on a knish. As rumors of food poisoning quickly spread, Dodie scrambles to rescue the Windjammer restaurant’s reputation. But when clues point to foul play, she’s faced with a cast of suspects all auditioning for the part of DiGenza’s murderer. She’ll need to act fast to shine a spotlight on the killer—before it’s curtains for another victim . . .

About the author:
Suzanne Trauth is a novelist, playwright, screenwriter, and a former university theatre professor. She is a member of Mystery Writers of America, Sisters in Crime, and the Dramatists Guild. When she is not writing, Suzanne coaches actors and serves as a celebrant performing wedding ceremonies. She lives in Woodland Park, New Jersey. Readers can visit her website at www.suzannetrauth.com.

I’ve been asked about the inspiration for my mystery series and where the characters and story originate. There have been a number of muses sitting on my shoulder during the writing of these novels (decades spent producing, directing, and teaching theatre for one), but I’d like to focus on another of the most significant sources that spurred my imagination. Dodie O’Dell, my protagonist, is the manager of the Windjammer restaurant in Etonville, New Jersey. (She’s also an amateur sleuth, but don’t tell her that. She’s dead serious about her detective skills…)

Now, I’ve been told that the Windjammer’s menu is mouth-watering—some of those specials sound delectable—and have been asked if I’m an amateur chef! I have to laugh. I am, at best, a middling cook, my best friend being the take-out menu on the kitchen counter. No, my inspiration continues to be a working kitchen. A gourmet soup kitchen in a town not far from mine where I spend Thursday mornings helping to prepare meals for the sixty-five to eighty guests that frequent the establishment. There are four courses offered – appetizer, soup, entrée, and dessert. Everything is made from scratch and the results are a gastronomic delight!

Though there is always a head cook that we volunteers assist, I sometimes find myself taking responsibility for one of the courses: chopping ingredients for the green salad, preparing roasted potatoes, sautéing vegetables, and breading chicken cutlets. I’m pretty good at taking direction—being a theatre director makes me appreciate the process of leading and following— and when I’m told to add this or adjust that, I’m good to go. I’ve only had one occasion when I got a little heavy-handed with the seasonings for the butternut squash soup…The head cook had to go into rescue mode.

Needless to say I learned my lesson. I stay away from the soup...unless it’s on the Windjammer menu! 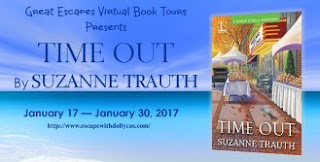