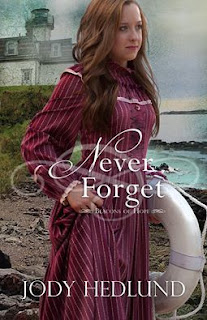 Synopsis:
Rose Island Lighthouse, Rhode Island June 1880 Will she betray his trust to stay on the island she loves? Abbie Watson is content to spend her days clamming, crabbing, and tending Rose Island Lighthouse. Her grandpa is the head light keeper, but his senility may lead to their eviction. Since leaving the island would kill her beloved Gramps, Abbie will do anything to keep him in the one place he knows and loves. Wealthy Nathaniel Winthrop III’s wild living has gained him a reputation as the ‘bad boy’ among the elite social circles of Newport. After a blow to the head in a yachting accident washes him up on Rose Island, Nathaniel has no memories of his past. Abbie tends the wounded stranger in her home only to realize he assumes they’re married. Although she knows she needs to correct Nathaniel’s mistake, his presence calms Gramps and provides a way to prevent eviction from the lighthouse. The longer the charade continues, the harder it gets for Abbie to tell Nathaniel the truth, more so as she begins to fall in love. Everyone she’s ever loved has abandoned her. Will Nathaniel leave her too, once he discovers he’s not really her husband? **NOTE: Never Forget is Book 5 in the Beacons of Hope series but can be read as a standalone novel.

My thoughts:
This has been one of my go to series. I love that they have all been set in a lighthouse and this book did not disappoint me. This is the last book in this series and I was sad to see it end. I will say you can read these as a stand alone but they are better if read in order. The author has a way of making you really feel the emotions of the characters and that you are a part of the book. She also does a good job in describing the setting of the story as well as the emotions of the characters. I think it was great that Abbie was trying to do what she could to help her grandpa out so he could stay where he is comfortable. Then you have Nathaniel who end up in a place he does not know where it is nor how he got there. But as things move along they both grow closer together. I thought this was a fitting end to this series.