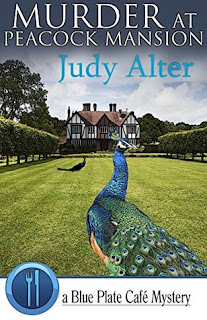 Synopsis:
Arson, a bad beating, and a recluse who claims someone is trying to kill her all collide in this third Blue Plate Café Mystery with Kate Chambers. Torn between trying to save David Clinkscales, her old boss and new lover, and curiosity about Edith Aldridge’s story of an attempt on her life, Kate has to remind herself she has a café to run. She nurses a morose David, whose spirit has been hurt as badly as his body, and tries to placate Mrs. Aldridge, who was once accused of murdering her husband but acquitted. One by one, Mrs. Aldridge’s stepchildren enter the picture. Is it coincidence that David is Edith Aldridge’s lawyer? Or that she seems to rely heavily on the private investigator David hires? First the peacocks die…and then the people. Everyone is in danger, and no one knows who to suspect.

About the author:
I'm really a mystery author! Hard for me to believe because it's always been my secret ambition to write mysteries. Six Kelly O'Connell Mysteries--Skeleton in a Dead Space, No Neighborhood for Old Women, Trouble in a Big Box, Danger Comes Home, Deception in Strange Places, and Desperate for Death--are now available in print and as e-books. And three Blue Plate Cafe Mysteries, Murder at the Blue Plate Café, Murder at the Tremont House, and Murder at Peacock Mansion, are also available. In that series, I move from an inner city urban neighborhood to a small town in East Texas.
New in October 2014: a self-published title, The Perfect Coed, which is a big leap for me in many ways, and I'm excited about it. It's set on a fictional college campus in Texas and features a prickly English professor who finds a coed's body in the trunk of her car. So far,it's gotten high praise. I'm the author of about eighty books for children and adults.My main interest for years was the experiences of women in the American West, and I've written six adult novels with that theme and seven young-adult novels. Three of the adult novels, now called Western Historical Romances--Libbie, Cherokee Rose, and Sundance, Butch and Me--are available on Kindle, as are Ballad for Sallie, a book about the late 19th-century street children in Fort Worth, Mattie, a novel about a pioneer woman physician on the Nebraska prairie, and Sue Ellen Learns to Dance, a collection of short stories about women in the Ameerican West. Also available are children's books on a variety of subjects and a memoir/cookbook (Cooking My Way Through Life with Kids and Books), ...and other works.
Another big switch in April 2016--back to historical with The Gilded Cage, set in Chicago as it grew from swampland to host of the 1893 World Columbian Exposition, following two leading historical figures: tycoon and hotelier Potter Palmer and his activist wife Bertha Honoré Palmer who fought for women’s rights and help for the poor. A story of love, major historical events, class warfare, intrigue, a forbidden love interest, and murder. Retirement is great, and I'm having fun writing. Please feel free to email me at j.alter@tcu.edu.

In Murder at Peacock Mansion, the eccentric recluse who feels threatened, delights in serving afternoon tea. It turns out to be what American generally call “high tea,” and Kate looks forward to those cucumber and smoked salmon sandwiches, as well as the scones and tiny cakes. But at best, per the British who gave us the tradition, it’s not high tea—it’s either afternoon tea or low tea.

Traditionally in 19th century Britain, high tea was served on a high table and was a substantial meal designed to feed the working class. It was heavy with meat and fish, crumpets, and potato and onion cakes, perhaps baked beans or a cheese casserole.

Afternoon or low tea on the other hand didn’t come about much until the mid-1800s when kerosene lamps had made it easier for Brits to have their dinner as late as eight or nine. Supposedly, the Duchess of Bedford complained of feeling light-headed from hunger in the late afternoons. She requested small cakes and pastries be sent to her room. Then she began to share her afternoon repast with other high society friends, and the custom became fashionable. Eventually it spread beyond high society to other socio-economic populations.

A typical afternoon tea features light foods, designed to appeal to ladies of leisure. There are often scones, sort of the quick-bread equivalent of American biscuits but made without yeast. They come plain or in a variety of flavors-cinnamon/raisin, cheddar/herb, gingerbread, and are often served with Devonshire or clotted cream—a thick cream made by heating whole cream cow’s milk and then letting the cream rise slowly to the top as the mixture cools. As it does so, clots or clumps form. In England it’s a great luxury, although you don’t hear much about it in the U.S. Scones however have become quite popular in this country.

A second course would be finger sandwiches—small, crustless sandwiches made to be eaten in two or three bites. They may be cucumber sandwiches, smoked salmon (those two are Kate Chambers’ favorites in Murder at Peacock Mansion). Chicken, tuna, egg or shrimp salad may be used as sandwich fillings. So can pimiento cheese—let your imagination run wild.

Curried chicken salad – Two cups finely shredded chicken, one half c. mayo, 8 oz. can crushed pineapple, thoroughly drained, one-fourth cup mango chutney, a tsp. or two of curry according to taste. Use wheat bread for this. Add the curry a bit at a time—it’s easy to get it too strong and overwhelm your guests taste buds.

Smoked salmon – layer smoked salmon on one piece of pumpernickel bread and add a bit of horseradish and some dill; or add cream cheese. With the latter, try to also add thinly sliced cucumber.

Radish and goat cheese – Thinly slice small bunch of radishes. Toss with a small amount of salt and let sit about ten minutes, then drain and rinse. Make sandwich as you would cucumber sandwich. For other uses, salting radishes softens their taste.

And then top it off with sweet cakes and pastries—probably what we’d call petit fours.

Of course you must serve hot tea, never iced (an American abomination)—usually at least one different variety with each course. There are 1500 types of tea in Britain, many imported from India and some from China. Most popular teas include Ceylon, Twining, Darjeeling, Taylors of Harrogate. Of course you must do as the Brits—brew loose leaf in a proper teapot and put milk, never cream, in your tea.

This is not the food Kate serves in the café!