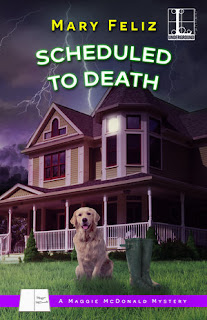 Synopsis:
Professional organizer Maggie McDonald has a knack for cleaning up other people’s messes. So when the fiancée of her latest client turns up dead, it’s up to her to sort through the untidy list of suspects and identify the real killer.

Maggie McDonald is hoping to raise the profile of her new Orchard View organizing business via her first high-profile client. Professor Lincoln Sinclair may be up for a Nobel Prize, but he’s hopeless when it comes to organizing anything other than his thoughts. For an academic, he’s also amassed more than his share of enemies. When Sinclair’s fiancée is found dead on the floor of his home laboratory — electrocuted in a puddle of water—Maggie takes on the added task of finding the woman’s murderer. To do so, she’ll have to outmaneuver the suspicious, obnoxious police investigator she’s nicknamed “Detective Awful” before a shadowy figure can check off the first item on their personal to-do list — Kill Maggie McDonald.

My thoughts:
I did not read the first book in this series and I did not feel lost at all. I will be going back and reading the first book now. Maggie was a hit with me - I loved that she is a professional organizer. She used all of her skills to find out who murdered Sinclair's fiancee. It is also nice that there are organizational tips at the beginning of each chapter. Now to just put them into use. Most of the characters were likable but I have to agree with Maggie and I did not like Detective Awful - he just rubbed me the wrong way at times. The author did a good job of hiding who the culprit was until the ending. Another thing I liked was how this book was easy to read. I am looking forward to reading more books by this author.

About the author:
Mary Feliz has lived in five states and two countries but calls Silicon Valley home. Traveling to other areas of the United States, she’s frequently reminded that what seems normal in the high-tech heartland can seem decidedly odd to the rest of the country.

A big fan of irony, serendipity, diversity, and quirky intelligence tempered with gentle humor, she strives to bring these elements into her writing, although her characters tend to take these elements to a whole new level.

She’s a member of Sisters in Crime, Mystery Writers of America, and the Authors Guild where she feels at home among those plot to kill. She's also a member of the National Association of Professional Organizers who seem less blood-thirsty and more interested in the skeletons in the closet.
Posted by Angela - Bookaunt at Sunday, February 05, 2017