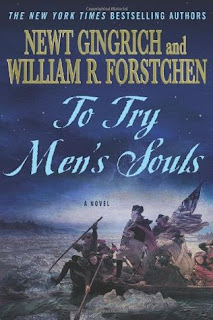 The action focuses on one of the most iconic events in American history: Washington cross - ing the Delaware. Unlike the bold, courageous General in Emanuel Leutze’s painting, Washington is full of doubt on the night of December 25, 1776. After five months of defeat, morale is dangerously low. Each morning muster shows that hundreds have deserted in the night.

While Washington prepares his weary troops for the attack on Trenton, Thomas Paine is in Philadelphia, overseeing the printing of his newest pamphlet, The Crisis.

And Jonathan Van Dorn is about to bring the war to his own doorstep. In the heat of battle, he must decide between staying loyal to the cause and sparing his brother who has joined up with the British. Through the thoughts and private fears of these three men, Gingrich and Forstchen illu minate the darkest days of the Revolution. With detailed research and an incredible depth of military insight, this novel provides a rare and personal perspective of the men who fought for, and founded the United States of America.

My thoughts:
Now if you read my blog you know I usually give the books I read a good review. It is not easy for me to give bad reviews but this book just did not do it for me. I felt this book was dry and really should have stopped reading it about 50 pages into it. Actually I put this book down three times before I finally got it finished. I kept going as I really wanted to like this book as I enjoy reading about this time period. While I give the author's credit for their vivid descriptions which really made me feel and understand all these soldiers went through for our freedom, it was just hard to read. At times I felt as if I was reading the same thing over and over again. I liked following the story of Jonathan and felt bad for him at the end. I do not think I will continue on with this series as I am afraid it will be just as dry. It was just amazing and heart wrenching at the same time all the guys went through. No food, no shoes and very little clothes, I do not think many people today could withstand this. At the same time I bought this book I bought the first book in their Civil War series and I hope it is written better. We shall see.