Before We Were Yours by Lisa Wingate - Review 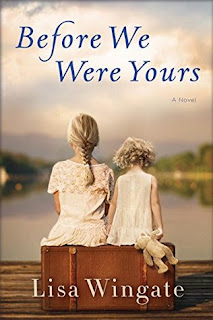 I received this book from the publisher for free

About the book:
Two families, generations apart, are forever changed by a heartbreaking injustice in this poignant novel, inspired by a true story, for readers of Orphan Train and The Nightingale.

Memphis, 1939. Twelve-year-old Rill Foss and her four younger siblings live a magical life aboard their family’s Mississippi River shantyboat. But when their father must rush their mother to the hospital one stormy night, Rill is left in charge—until strangers arrive in force. Wrenched from all that is familiar and thrown into a Tennessee Children’s Home Society orphanage, the Foss children are assured that they will soon be returned to their parents—but they quickly realize that the truth is much darker. At the mercy of the facility’s cruel director, Rill fights to keep her sisters and brother together—in a world of danger and uncertainty.

Aiken, South Carolina, present day. Born into wealth and privilege, Avery Stafford seems to have it all: a successful career as a federal prosecutor, a handsome fiancé, and a lavish wedding on the horizon. But when Avery returns home to help her father weather a health crisis, a chance encounter leaves her with uncomfortable questions—and compels her to take a journey through her family's long-hidden history, on a path that will ultimately lead either to devastation . . . or redemption.

Based on one of America’s most notorious real-life scandals—in which Georgia Tann, director of a Memphis-based adoption organization, kidnapped and sold poor children to wealthy families all over the country—Wingate’s riveting, wrenching, and ultimately uplifting tale reminds us how, even though the paths we take can lead to many places, the heart never forgets where we belong

My thoughts:
When I finished this book last night the first thing I had to say to myself was wow - what a powerful book. I have read all of Lisa's Carolina series and loved each of them and thought they were touching, but this one was even more so. If that is even possible.

I had never heard the story of Georgia Tann or the Tennessee Children's Home Society so this was all new to me. From page one I felt horrible for Rill/May and her entire family. I can not even begin to imagine what is must have felt like to have total strangers come and take you away never to see your parents again. Nor how the parents felt to find their children had disappeared or even worse to be told they died when in fact they did not. How extremely painful.

I liked ho Lisa told both tales of Avery and Rill/May. Avery the granddaughter who was wanted to find out the secret of her grandma's past and how she is connected to May. Then Rill/May's story of survival of a childhood that you cannot imagine. Some of the things he as well as the other kids had to endure was unthinkable. You wonder how they survived such things and were able to overcome some of it.

Lisa did a great job in the details of the emotions and the scenes. I felt as if I was right there with Rill/May. I wanted to give her a hug and to help her in whatever way was possible. She is one of the few authors that can write a book that effects me so much. With each page I wanted more of the story, more of the history, even at the end I wanted more. I wanted to sit down and listen to May and Judy talk about their past and here their story told by them. I loved the ending but wish I could have know what actually happened to the other three siblings.

This book would also make a great movie. I highly recommend it. It is one of the best books I have read this year.

About the author:
Lisa Wingate is a former journalist, an inspirational speaker, and the bestselling author of more than twenty novels. Her work has won or been nominated for many awards, including the Pat Conroy Southern Book Prize, the Oklahoma Book Award, the Carol Award, the Christy Award, and the RT Reviewers’ Choice Award. Wingate lives in the Ouachita Mountains of southwest Arkansas.
Posted by Angela - Bookaunt at Tuesday, March 21, 2017