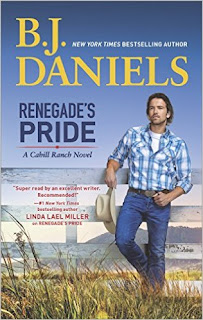 About the book:
The renegade cowboy returns

It’s been nine years since Trask Beaumont left Gilt Edge, Montana, with an unsolved crime in his wake, and Lillian Cahill has convinced herself she’s finally over him. But when the rugged cowboy with the easy smile suddenly shows up at her bar, there’s a pang in her heart arguing the attraction never faded. And that’s dangerous, because Trask has returned on a mission to clear his name and win Lillie back.

Tired of running, Trask knows he must uncover the truth of the past before he can hope for a future with the woman he’s never forgotten. But if Lillie’s older brother, the sheriff, learns that Trask is back in town, he’ll arrest him for murder. Now Trask is looking for a showdown, and he won’t leave town again without one—or without Lillie.

About B. J. Daniels
NYT and USA Today Bestselling author B.J. Daniels was born in Texas but moved with her family to Montana at the age of five. Her first home was a cabin in the Gallatin Canyon and later a lake house on Hebgen Lake outside of West Yellowstone.

When she isn’t writing, she loves to play tennis, boat, camp, quilt and snowboard. There is nothing she enjoys more than curling up with a good book.

Connect with B. J. Daniels
Website | Facebook | Twitter
Excerpt:
Back at the Stagecoach Saloon, Darby made enough breakfast for the three of them, but Lillie had lost her appetite. She kept thinking of Trask in the days before he’d left nine years ago. Something had been bothering him for several weeks. A darkness had taken hold of him. Her usually cheerful, laid-back lover was moody and irritable. She’d often found him scowling and he’d definitely been distracted.

“Sorry, I’ve just had things on my mind.”

“Things you want to talk about?”

He’d pulled her to him, kissed her and said, “It’s nothing to do with you. I’ll handle it, okay? Just give me a little time.”

She’d had no idea what that meant. He’d even been at odds with his best friend, Johnny Burrows. She’d seen the two of them having a heated argument one day when she’d went by the Lazy G Bar Q Ranch, where Trask worked. When Trask had seen her, he’d quickly stepped away and pretended it was nothing.

“I’m not a fool. What’s going on between you and Johnny?”

“Just a difference of opinion. It’s nothing.”

She suspected that all of it had been leading up to the fight with his boss, Gordon Quinn, and him get­ting fired. But did she really believe that Trask had come back that night and killed Gordon?

Now she half listened distractedly as her father and Darby talked about the weather, the price of gold and the decline of elk in Yellowstone Park and the rest of Montana because of the reintroduction of wolves. She’d been pushing her food around on her plate until her brother finally took her plate along with his own and her father’s, and headed for the kitchen. She followed him, wanting to talk to him alone.

“Flint thinks we need to do something about Dad,” she told him, making sure their father was out of earshot.

“What do you think?” Darby asked as he began stacking the rinsed dishes in the commercial dish­washer, then looked at her.

“I don’t know. One minute he seems so like his old self, and then he starts talking about aliens and abductions. He swears they came after him again last night. Apparently, that’s why he got so drunk and so…‘disorderly,’ as Flint put it.” She smiled, feeling almost ashamed as she did. “He punched Harp in the eye.” She winced. “His eye was swollen shut when I saw him at the jail this morning.”

Darby chuckled. “You can bet that Harp asked for it. As for Dad, it doesn’t sound like anything new to me. But you shouldn’t always be the one to take care of him. Call Cyrus or Hawk next time. They aren’t that busy on the ranch that they can’t get Dad out of jail once in a while. And you know you can always call me.”

“I know, but I didn’t mind going,” she said with a shrug. Her brother’s smile was thanks enough. “I’d better get him home. He’s determined to stay there alone. At least until he can’t take it anymore and heads for the hills.”