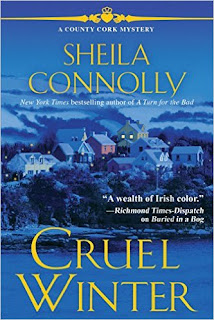 Synopsis:
Snow is a rarity in Maura Donovan's small village in County Cork, Ireland, so she wasn't sure what to expect when a major snowstorm rolled in around Sullivan's pub. But now she's stranded in a bar full of patrons--and a suspected killer in a long-ago murder.

Maura’s been in Ireland less than a year and hasn't heard about the decades-old unsolved crime that took place nearby, let alone the infamous suspect, Diane Caldwell. But the locals have, and they're not happy to be trapped with her. Diane, meanwhile, seeks to set the record straight, asserting her innocence after all this time. And since no one is going anywhere in the storm, Maura encourages Diane to share her side of the story, which she’d never had a chance to do in court.

Over the next few hours, the informal court in Sullivan’s reviews the facts and theories about the case--and comes to some surprising conclusions. But is it enough to convince the police to take a new look at an old case? A clever spin on the classic locked room mystery, Cruel Winter, the fifth in New York Times bestselling author Sheila Connolly's series, will delight fans of the Emerald Isle.

My thoughts:
I have enjoyed this book even more than the last one I read in this series. It is nice to go back to Ireland and visit "friends". Can you imagine being stuck in a pub with a murder suspect from an unsolved murder? I for one would be a nervous wreck. Luckily for Diane this was a chance to clear her name with the town. It was fun to see how all these people ended up working together to solve a twenty year old crime. This was the enjoyable part of the book for me. I thought the characters really came to life and the author did a good job of making the reader feel like a part of the story. I can't wait to see what she has in store for us in the next book.

About the author:
After collecting too many degrees and exploring careers ranging from art historian to investment banker to professional genealogist, Sheila Connolly began writing in 2001, and has now published eight traditional mysteries. Now a full-time writer, she thinks writing mysteries is a lot more fun than any of her previous occupations.

She wrote her first mystery series for Berkley Prime Crime under the name Sarah Atwell, and the first book, Through a Glass, Deadly (March 2008), was nominated for an Agatha Award for Best First Novel; Pane of Death followed in November 2008, and Snake in the Glass in September 2009.

Under her own name, Connolly writes the Orchard Mystery Series (Berkley Prime Crime), set in western Massachusetts, where she had generations of ancestors. In fact,the series is set in a house built by one of her 7th great-grandfathers. The series debuted in 2008 with One Bad Apple, followed by Rotten to the Core (2009), Red Delicious Death (2010), A Killer Crop (2010), and Bitter Harvest (2011). Sour Apples appeared in August 2012 and was a New York Times bestseller.

Connolly's second series, the Museum Mysteries (Berkley Prime Crime), takes place among the many museums of Philadelphia. Fundraising the Dead came out in October 2010, Let's Play Dead in 2011, and the third, Fire Engine Dead, in March 2012. The fourth book, Monument to the Dead, came out in June 2013. Since she worked for several years at a major historical institution in Philadelphia, she can present a lot of behind-the-scenes details of the cultural scene there.

Connolly's third series, the County Cork Mysteries, opened with Buried in a Bog in February 2013 and it went to #14 on the New York Times Mass Market Bestseller list. This new series features a Boston-reared American woman who finds herself running a pub in a tiny village in West Cork. Connolly's grandfather was born in that region, and there used to be a wonderful pub called Connolly's in Leap.

Connolly's first full-length, standalone ebook, Once She Knew, was published by Beyond the Page in October 2012. Her second, Relatively Dead, came out in May 2013.

Connolly has also published short stories: "Size Matters" appeared in the 2010 Level Best Anthology, Thin Ice; "Called Home," a short prequel to the Orchard series, was published by Beyond the Page in 2011; and "Dead Letters," an e-story featuring the main characters from the Museum series, will be published by Berkley Prime Crime in February 2012. Beyond the Page also published "The Rising of the Moon," and another Level Best anthology includes "Kept in the Dark," which was nominated for both an Agatha award and an Anthony award for 2013.

She lives in a too-big Victorian in southeastern Massachusetts with her husband and two cats. Find out more about her at her website, www.sheilaconnolly.com