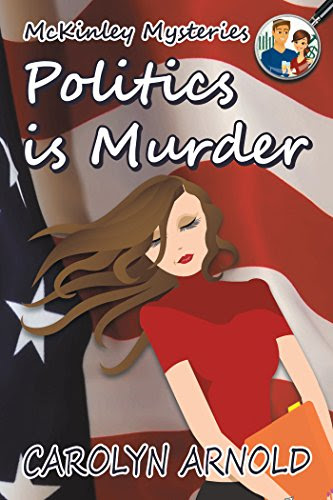 A Parents’ Worst Nightmare Comes to Life in POLITICS IS MURDER

From what I hear, most parents fear sending their kids off to college as much as they are excited for them to go. In Politics is Murder, a parents’ worst nightmare comes to life for Wayne Davenport, the mayor of Albany, when his daughter, Halie, goes missing from her university campus. With his career being so high profile, he still strives to keep this matter out of the news and turns to Sean and Sara McKinley to help find Halie. The only thing is Albany PD is already working the case.

At the risk of pitting themselves against their former colleagues and sergeant and friend Jimmy Voigt, Sean and Sara set out to the university to get answers. But with Davenport’s position, he’s made a lot of enemies and it may be one of them who have his daughter. Sean and Sara are going to have to sort through motives and suspects if they have any hope of finding Halie and returning her alive. They may even have to call upon their good friend Jimmy for help, after all.

Book Overview:
There's no time for a debate…

Sean and Sara’s popularity as a murder-solving duo has gained momentum. But it’s not until it comes time for a local television interview that they meet Reanne Mable and end up finding themselves involved with a high-profile investigation.

Reanne is the sister-in-law of Albany’s Mayor Davenport and his daughter, Halie, has gone missing from her university campus. With a desire to keep the matter out of the media spotlight, Davenport turns to Sean and Sara to find her. But with the police already investigating the matter, taking this case would pit them against their friends from the police department, including their former sergeant Jimmy Voigt.

As time moves on, though, the fate of the girl is not up for a vote, and the McKinleys set out to find out what really happened. With the mayor taking the heat for a recently passed zoning bylaw, is an enraged small business owner behind Halie’s disappearance? Or did she simply grow tired of living in her father’s limelight and run away?

To get the answers, Sean and Sara will need to use all the resources at their disposal and may have to call upon their good friend Jimmy for help, after all.

About the McKinley Mysteries:
Romance. Humor. Murder. Are you looking for a murder mystery without all the graphic violence and foul language? Something that you can enjoy in an afternoon and walk away feeling good about afterward? How about a dash of humor and romance? If so, meet former detectives Sean and Sara McKinley. When a billionaire leaves them all his money, they no longer have to work, but they find themselves sticking to what they’re good at—solving murders. Undercover, off the books, and around the world, they’ll get to the bottom of things…and romance it up along the way.

This is the perfect book series for fans of Hart to Hart, Castle, Colombo, Monk, Rockford Files, Psych, and Magnum PI.

About the Author
Carolyn Arnold is an international bestselling and award-winning author, as well as a speaker, teacher, and inspirational mentor. She has four continuing fiction series and has written nearly thirty books. Both her female detective and FBI profiler series have been praised by those in law enforcement as being accurate and entertaining, leading her to adopt the trademark, POLICE PROCEDURALS RESPECTED BY LAW ENFORCEMENT™.

And don’t forget to sign up for her newsletter for up-to-date information on release and special offers at http://carolynarnold.net/newsletters.