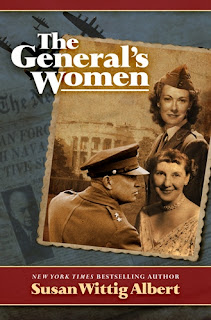 Set during the chaotic years of World War II, The General’s Women tells the story of the conflicted relationship between General Dwight Eisenhower and Kay Summersby, his Irish driver/aide, and the impact of that relationship on Mamie Eisenhower and her life in Washington during the war. Told from three alternating points of view (Kay’s, Ike’s, and Mamie’s), the novel charts the deepening of the relationship as Ike and Kay move from England (1942) to North Africa (1942-43) to England, France, and Germany before and after the Normandy landing (1944-45). At the end of the war, Ike is faced with the heart-wrenching choice between marrying Kay and a political future.

The story continues into the post-war years, as Ike (returning to Mamie) becomes Army Chief of Staff, president of Columbia University, Supreme Commander of NATO, and president of the United States. Kay, meanwhile, struggles to create a life and work of her own, writing two memoirs: the first (Eisenhower Was My Boss, 1948) about her war work with Ike; the second (Past Forgetting, 1976) about their love affair. An author’s note deals with the complicated question of the truth of Kay’s story, as it finally appears in the posthumously-published Past Forgetting.

Amazon | Barnes & Noble | Chapters | IndieBound | iTunes | Kobo
Praise for The General’s Women
“The General’s Women is an engrossing and humanizing account of a love that blossomed during wartime and scandalized a nation… A historical novel that is sympathetic, satisfying, and heartbreaking.” —Foreword Reviews

“A mature, gripping emotional drama… The arc of this multifaceted novel follows the three main characters [Ike, Kay, and Mamie] and a host of secondary ones through the war and back into civilian life. At every point Albert smoothly incorporates an obviously vast amount of research into a tale of raw emotional conflict that can make for some wonderfully uncomfortable reading.” —Kirkus Reviews

“A brilliant work of biographical fiction that will fascinate WW2 history fans. It tells the remarkable true story of General Dwight D Eisenhower and his relationship with his Irish-born driver and secretary, Kay Summersby, and with his longtime wife Mamie. It faithfully shines a light on the hidden relationship of the man behind the D-Day landings and what he got up to while 3,000 miles from his wife. A must read!” —Kieron Wood, author of Ike’s Irish Lover: The Echo of A Sigh
About the Author
A NYT bestselling author, Susan’s books include biographical fiction (A Wilder Rose 2013, currently under film option; Loving Eleanor 2016; and The General’s Women 2017). Her mystery fiction includes the bestselling China Bayles mysteries; The Darling Dahlias; the Cottage Tales of Beatrix Potter; and the Robin Paige Victorian/Edwardian mysteries written with her husband, Bill Albert. Working together, the Alberts have also written over 60 young adult novels.

Susan’s most recent nonfiction work includes two memoirs: An Extraordinary Year of Ordinary Days and Together, Alone: A Memoir of Marriage and Place. Her earlier nonfiction work includes Work of Her Own, a study of women who left their careers, and Writing From Life: Telling Your Soul’s Story, a guidebook for women memoirists. That book led to the founding of the Story Circle Network in 1997. She has edited two anthologies for the Story Circle Network: With Courage and Common Sense (2004) and What Wildness Is This: Women Write about the Southwest (2007). She currently serves as editor of StoryCircleBookReviews and co-coordinator of SCN’s Sarton Women’s Book Awards.

She and Bill live in the Texas Hill Country, where she writes, gardens, and tends a varying assortment of barnyard creatures.

What did I think about this book:
I am a fan of Susan's books so I was happy to get to read this new book by her. This book was about an era that I do not know a lot about as I don't normally read much from this time but I was interested to read what the author had to say about this subject. I liked the author's writing style and how she told this story from three different points of view. This book just seemed to flow along. The author's research came out in the telling of Eisenhower and Kay's story. It was also nice to get the epilogue that tells us a little more about their complicated relationship. If you are looking to learn a little bit about history and a former president of the US , then I would suggest giving this book a try. It did not disappoint me and I don't think it will you either.

Sunday, August 6
Feature at Passages to the Past

Tuesday, August 8
Review at Hopewell’s Public Library of Life
Review at History From a Woman’s Perspective