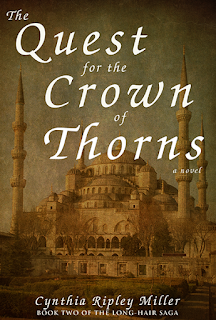 About this book:
AD 454. Three years after the Roman victory over Attila the Hun at Catalaunum, Arria Felix and Garic the Frank are married and enjoying life on Garic’s farm in northern Gaul (France). Their happy life is interrupted, when a cryptic message arrives from Rome, calling Arria home to her father, the esteemed Senator Felix. At Arria’s insistence, but against Garic’s better judgment, they leave at once.

Upon their arrival at Villa Solis, they are confronted with a brutal murder and the dangerous mission that awaits them. The fate of a profound and sacred object–Christ’s Crown of Thorns–rests in their hands. They must carry the holy relic to the safety of Constantinople, away from a corrupt emperor and old enemies determined to steal it for their own gain.

But an even greater force arises to derail their quest–a secret cult willing to commit any atrocity to capture the Crown of Thorns. And all the while, the gruesome murder and the conspiracy behind it haunt Arria’s thoughts.

Arria and Garic’s marital bonds are tested but forged as they partner together to fulfill one of history’s most challenging missions, The Quest for the Crown of Thorns.

Praise
“Ripley Miller astutely brings to life a Rome teetering precariously on the brink of collapse …the combination of political and romantic drama–spiritual as well–is rousing. The reader should be glad to have read this volume and eager for a third. Intelligent and artfully crafted historical fiction…” -Kirkus Reviews

“From cover to cover a gripping read – in all senses of the word! Grips your interest and imagination, your held breath and your pounding heart! A thumping good novel!” -Helen Hollick USA Today bestselling author of the Sea Witch Voyages

“A passionate and intriguing take on the often overlooked clash of three brutal and powerful empires: the Romans, Franks, and Huns. A Compelling read!” -Stephanie Thornton, author of The Secret History and The Tiger Queens

“Readers will be absorbed by a setting of barbarian Gaul and the constancy of Arria’s and Garic’s destined love amid the strife of a dying Roman Empire.” -Albert Noyer, author of The Getorius and Arcadia Mysteries

“The Quest for the Crown of Thorns, is an elegant masterpiece of historical fiction. This book totally ensnared me in its clasps, and it did not release me until I had read it all. The attention to detail was exquisite The characterisation was sublime, and the romance was breathtakingly beautiful. I adored the world that Miller has created, as well as the characters in it. This is a sit-down and finish book and is one I would Highly Recommend.” -Mary Anne Yarde author of the Du Lac Chronicles


Meet the author - Cynthia Ripley Miller:
Cynthia Ripley Miller is a first generation Italian-American writer with a love for history, languages and books. She has lived, worked, and travelled in Europe, Africa, North America and the Caribbean. As a girl, she often wondered what it would be like to journey through time (she still does), yet knew, it could only be through the imagination and words of writers and their stories. Today, she writes to bring the past to life.

She holds two degrees and has taught history and teaches English. Her short fiction has appeared in the anthology Summer Tapestry, at Orchard Press Mysteries.com and The Scriptor. A Chanticleer International Chatelaine Award finalist for her novel, On the Edge of Sunrise, she has reviewed for UNRV Roman History, and blogs at Historical Happenings and Oddities: A Distant Focus

Cynthia has four children and lives with her husband, twin cats, Romulus and Remus, and Jessie, a German Shepherd, in a suburb of Chicago.

On the Edge of Sunrise is the first in the Long-Hair Saga; a series set in late ancient Rome and France and published by Knox Robinson Publishing. The second book in the series, The Quest for the Crown of Thorns, was released in June 2017.

Giveaway Rules
– Giveaway ends at 11:59pm EST on August 15th. You must be 18 or older to enter.
– Giveaway is open to residents in the US only.
– Only one entry per household.
– All giveaway entrants agree to be honest and not cheat the systems; any suspect of fraud is decided upon by blog/site owner and the sponsor, and entrants may be disqualified at our discretion.
– Winner has 48 hours to claim prize or new winner is chosen.
The Quest for the Crown of Thorns

Thursday, August 10
Feature at CelticLady’s Reviews
Feature at What Is That Book About

Monday, August 14
Interview at Passages to the Past

Tuesday, August 15
Review at Bookramblings
Feature at Impressions In Ink