A Column of Fire by Ken Follett - Review 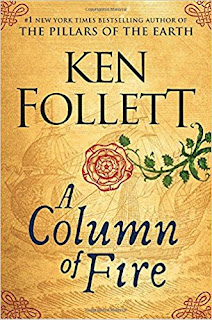 Book description
As Europe erupts, can one young spy protect his queen? International bestselling author Ken Follett takes us deep into the treacherous world of powerful monarchs, intrigue, murder, and treason with his magnificent new epic, A Column of Fire.

In 1558, the ancient stones of Kingsbridge Cathedral look down on a city torn apart by religious conflict. As power in England shifts precariously between Catholics and Protestants, royalty and commoners clash, testing friendship, loyalty, and love.

Ned Willard wants nothing more than to marry Margery Fitzgerald. But when the lovers find themselves on opposing sides of the religious conflict dividing the country, Ned goes to work for Princess Elizabeth. When she becomes queen, all Europe turns against England. The shrewd, determined young monarch sets up the country’s first secret service to give her early warning of assassination plots, rebellions, and invasion plans. Over a turbulent half century, the love between Ned and Margery seems doomed as extremism sparks violence from Edinburgh to Geneva. Elizabeth clings to her throne and her principles, protected by a small, dedicated group of resourceful spies and courageous secret agents.

The real enemies, then as now, are not the rival religions. The true battle pitches those who believe in tolerance and compromise against the tyrants who would impose their ideas on everyone else—no matter what the cost.

Set during one of the most turbulent and revolutionary times in history, A Column of Fire is one of Follett’s most exciting and ambitious works yet. It will delight longtime fans of the Kingsbridge series and is the perfect introduction for readers new to Ken Follett.

Meet the author - Ken Follett
Ken Follett was only twenty-seven when he wrote the award-winning EYE OF THE NEEDLE, which became an international bestseller. His celebrated PILLARS OF THE EARTH was voted into the top 100 of Britain's best-loved books in the BBC's the Big Read and the sequel, WORLD WITHOUT END, will be published in Autumn 2007. He has since written several equally successful novels including, most recently, WHITEOUT. He is also the author of non-fiction bestseller ON WINGS OF EAGLES. He lives with his family in London and Hertfordshire.

My thoughts
I thought this was a good book even though it was quite large. The author did a good job of holding my interest throughout the whole story which was nice. I know this book was the third book in a series but you can read this book as a stand alone. In fact I was having a hard time remembering names from the last book. I liked that this told the story of Queen Elizabeth and Mary Queen of Scots but from a different point of view. My favorite character of the book was Ned Willard. I felt bad for him at times and just wanted him to have a happy comfortable life. I also liked Margery and understood why she did some of the things she did as an adult. It was not nice of her family to not let her be with the man she wanted to be with but the horrible person they thought she should be with. I thought the two strongest people of the book were Margery and Silvia and how they held strong to their beliefs. All in all a very good book.
Posted by Angela - Bookaunt at Friday, March 23, 2018