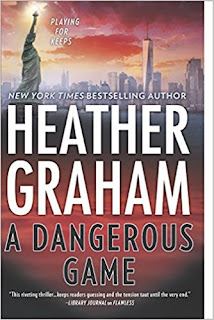 Wrapping up a normal day at the office, criminal psychologist Kieran Finnegan is accosted by a desperate woman who shoves an infant into her arms and then flees, only to be murdered minutes later on a busy Manhattan street.

Who was the woman? Where did the baby come from? Kieran can’t stop thinking about the child and the victim, so her boyfriend, Craig Frasier, does what any good special agent boyfriend would do—he gets the FBI involved. And asks Kieran to keep out of it.

But the Finnegans have a knack for getting into trouble, and Kieran won’t sit idle when a lead surfaces through her family’s pub. Investigating on her own, she uncovers a dangerous group that plays fast and loose with human lives and will stop at nothing to keep their secrets—and they plan to silence Kieran before she can expose their deadly enterprise.

Meet the author - Heather Graham
New York Times and USA Today bestselling author Heather Graham has written more than a hundred novels. She’s a winner of the RWA’s Lifetime Achievement Award, and the Thriller Writers’ Silver Bullet. She is an active member of International Thriller Writers and Mystery Writers of America. For more information on Heather and her work, check out her websites:

Excerpt
The folder that Richard Egan had given Craig didn’t yield much more than he already knew; the murdered woman had been found with no identification—no purse, nothing. She’d been wearing clothing with labels from the largest chain re­tail outlet offering budget-priced brands. There were liter­ally dozens of the shops in the five boroughs alone. Her shoes had been the most common brand of sneaker. The hood she’d had wrapped over her head was a scarf that had most probably been bickered over and bought on the street.

She had been about five foot five inches in height, esti­mated age about forty.

The baby had been healthy and well kept—also wearing clothing bought at the same bargain-priced chain. The blanket covering the baby, however, had been hand knit. The creator had not signed the work in any way. Still, it was one of a kind.

The knife found in the woman’s back was equally common—sold at outlets across the five boroughs, the state and the coun­try. It was a hunting knife with a leather handle and six-inch blade.

The woman had been struck so hard that nearly four of those inches had gone into her back.

There were no fingerprints found on the knife.

The bystanders had been canvassed for information. No one remembered anyone suspicious in the crowd; no one had seen who had thrust the blade into the woman’s back.

It was impossible—absolutely impossible, Craig thought. He tried to reimagine the crime, the woman hurrying away…

Someone must have seen something. They were afraid. Or it had been so swift an act that they hadn’t even understood what they had seen. Maybe, when people thought about it…

He set the folder down, frustrated. There was a tap at his open door. He looked up. His partner, Mike Dalton, stood in the doorway.

“So I come back from a glorious vacation to you and Kieran stirring up the neighborhood again,” he said drily. “You missed me, huh?”

“I did miss you, Mike. I always miss you when we’re apart,” Craig said, grinning. “I’m sure you heard about the news-making events.”

“I did. Murder and mummies. Creepy!”

Craig pressed his lips into a tight line and nodded. “I worked the case with an old friend, guy named Micah Fox, and one of my cousins—mostly their case. A man they both admired had been killed in Egypt—a mentor. Weird case for sure, but…hey, yeah. I’m glad you’re back!” Mike was a great partner. Ten years Craig’s senior, he’d been the one to really show Craig the ropes. They both had the same sense of moral duty, of right and wrong, and a way of thinking together that had gotten them through many a situation.

“I read all about your mummies,” Mike told him. He shud­dered. “And saw it all over the news. Mummies! Glad you did that one without me. Actually…well, hell, this one sounds pretty bad. A woman stabbed, during rush hour, in the street, and no one saw it, no one can say anything?”

Craig pushed the folder toward him. “This is what they have. Autopsy coming up in a few hours. I was trying to catch up on all the reading first.”

“Thanks for getting here on Saturday—and so damned early.”

“Hey, nothing like a good autopsy to get you right back into it all, right?”

Mary Kathleen had been right about the people who ar­rived at Soup du Jour.

Most were clean and decently clad, and between them, they seemed to speak every language known to man, and yet they all seemed to get on with one another, as well.

The space where the multi-faith organization operated had once been a giant textile factory. The machinery was long gone. Big old windows covered half the wall space—a great early effort in solar power, using daylight to see and work—and they still let in a glow of beautiful, natural light, though, of course, it was now enhanced by electrical power within. The rest of the walls were covered with posters, fliers and more—all to help men and women find apartments, jobs, day care and various other kinds of assistance.

The facility had a massive kitchen and a delivery area that was nearly as large. It had a massive dining hall with wood-plank tables, and on each side of the main room were large hallways that offered restrooms and showers—along with soap and razors and other basic toiletries, donated by various large corporations.

It was really a big enterprise—and it was astonishing the way that it was run.

People of every religion, ethnicity, color, creed, sex—what­ever!—seemed to get along and pull together, and do it well.

Those working the food bank seemed to come from all walks of life: there were businessmen and -women, nuns, fa­thers, rabbis and imams, young and old, every color of hu­manity.

Kieran had come to give herself something to do. She dis­covered, instead, that she was in awe of Mary Kathleen and all that the volunteers tried to do at Soup du Jour.

“This is truly just incredible,” she told Mary Kathleen. “You’ve been doing this and I didn’t even know. It’s won­derful.”

“Oh, I do a day a week. That’s the great power of the place—they literally have hundreds of people who can come a day or two a week and we’ll do our best to cover for each other and that kind of thing,” Mary Kathleen said. “I was lucky. I had friends to help me when I arrived here in the city. My family in Ireland knew your family here. I’m actu­ally doing well. But I am an immigrant, and I was able to see how hard life could be for others who didn’t have family and friends in the US—especially those fleeing poverty or war-torn countries. Anyway, I’m glad you like it!”

“Like it? I’m amazed. We get so much bad news—this is great!”

“People actually can get along working together,” Mary Kathleen agreed. She laughed softly. “Okay, so we have po­lice officers among our friends here, too. If anything were to ever get rough or violent in any way, whoever caused trou­ble would be out on their ears in a flash! But I’ve been at this about a year and a half. So far, nothing bad has ever happened. People are really just trying to help each other.”