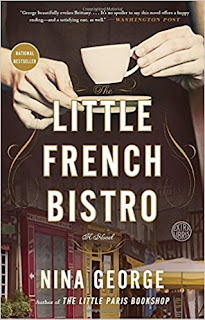 Book description
From the New York Times and internationally bestselling author of The Little Paris Bookshop, an extraordinary novel about self-discovery and new beginnings.

Marianne is stuck in a loveless, unhappy marriage. After forty-one years, she has reached her limit, and one evening in Paris she decides to take action. Following a dramatic moment on the banks of the Seine, Marianne leaves her life behind and sets out for the coast of Brittany, also known as “the end of the world.”

Here she meets a cast of colorful and unforgettable locals who surprise her with their warm welcome, and the natural ease they all seem to have, taking pleasure in life’s small moments. And, as the parts of herself she had long forgotten return to her in this new world, Marianne learns it’s never too late to begin the search for what life should have been all along.

With all the buoyant charm that made The Little Paris Bookshop a beloved bestseller, The Little French Bistro is a tale of second chances and a delightful embrace of the joys of life in France.

Meet the author - Nina George
Born 1973 in Bielefeld, Germany, Nina George is a prize-winning and bestselling author (“Das Lavendelzimmer” – “The Little Paris Bookshop”) and freelance journalist since 1992, who has published 26 books (novels, mysteries and non-fiction) as well as over hundred short stories and more than 600 columns. George has worked as a cop reporter, columnist and managing editor for a wide range of publications, including Hamburger Abendblatt, Die Welt, Der Hamburger, “politik und kultur” as well as TV Movie and Federwelt. Georges writes also under three pen-names, for ex “Jean Bagnol”, a double-andronym for provence-based mystery novels.

In November 2011, Nina George established the “JA zum Urheberrecht” (YES on Author’s Rights) initiative, which supports the rights of authors, artists and entertainers and is dedicated to resolving issues within the literary community as well as establishing fair and practical rights-license models for the web-distribution. 14 writers’ associations and 27 publishing partners have since joined the JA…-Initiative. George supports the “Initiative Urheberrecht” (Author’s Rights Initiative—www.urheber.info) as well as the “gib 8 aufs Wort”-campaign of the VG Wort.

In August 2014 George initiated the Amazon-protest in Germany www.fairer-buchmarkt.de, where overs 2000 germanspeaking authors – Nobelprizewinnig Elfriede Jelinek or Bestsellingauthor Nele Neuhaus – sign an open letter to Jeff Bezos and Amazon, protesting against the banned-book-methods of the giant retailer in the Hachette/Bonnier-dispute.

In 2015 George is the founder of the Initiative Fairer Buchmarkt e.V., which supports questions of law in daily business of authors – for ex in contracts, fees or author’s rights and e-Business.

My thoughts
I enjoyed this author's first book The Little Paris Bookshop so I was happy when I got the chance to read and review this one. Marianne had a lot of guts/back bone to be able to walk away from a long marriage. I don't know that I could have done that so I respect her for changing something in her life that did not make her happy anymore. The characters that the author introduced us to through Marianne's new discovery of herself we interesting and added to the story. I found myself wanting the main character to be happy. Even though a lot of reviews on this book were not as good as the first book I still enjoyed it and will continue to look for books by this author.
Posted by Angela - Bookaunt at Sunday, March 04, 2018