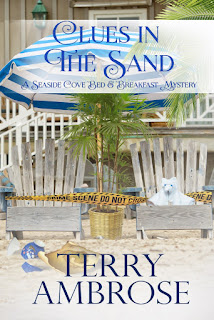 Book description
To Rick Atwood’s dismay, the police find a body on the beach near his Seaside Cove B&B. The dead woman held a pottery shard from an ancient rice bowl, which the cops believe is a clue to her murder.

The chief suspect is Flynn O’Connor, a female archaeologist known for her hatred of treasure thieves. Trouble is, Rick’s daughter Alex sees Flynn as a role model and will not believe her friend is a killer.

Alex pressures her dad as only a ten-year-old can to prove Flynn is innocent. The mayor is also making demands—for Rick to stay out of the investigation. With his daughter and the mayor at odds, Rick sees trouble brewing. He knows too well how much Alex loves sticking her nose where it doesn’t belong. Especially when there’s murder involved.

Meet the author - Terry Ambrose
Terry Ambrose is a former skip tracer who only stole cars when it was legal. He’s long since turned his talents to writing mysteries and thrillers. Several of his books have been award finalists and in 2014 his thriller, “Con Game,” won the San Diego Book Awards for Best Action-Thriller. He’s currently working on the Seaside Cove Bed & Breakfast Mystery series.

That author person has gone too far! Do you know what he did to me? He stuck me in the attic in the dark. I’m ten! Everybody totally knows attics can be super spooky places at night! And he was, like, too cheap to have more than one lightbulb up there!

My dad told me the attic was off limits. He used his deep, dad voice for that one. It’s so lame, but I was going along with it because I didn’t want to get grounded again. So what did that author person do? He put some stuff up there I couldn’t stay away from. That’s, like, totally unfair.

I got a way to get my author person back. Me and my fellow characters are going to sign a Characters Declaration of Independence. It’s gonna be just like the real one we studied in school.“We the characters, in order to form a more perfect story…” It’s totally gonna work.

My dad doesn’t like me to say mean things about other people, but my author person isn’t just anybody. He’s the one who’s supposed to be writing down what we tell him. But he, like, doesn’t listen. When I told him I wanted to have a real mom and Marquetta, our cook, was perfect, he was like, “You’ll have to work for it.”

What’s with that? I’m ten years old. I should have a mom who loves me, right? And he was like, “It can’t happen that fast, Alex.”

And he was like, “You’ll be okay. You’re resilient.”

I had to go ask my dad what resilient meant. That’s so bogus. And then my author person told me a bunch of his writer friends ganged up on him because a kid wouldn’t know the word bogus. For real? Hello! They’re not ten. How would they know? I gotta give him credit for standing up to them and saying I could keep the word.

But, he was clueless about Daddy and Marquetta. He didn’t know they liked each other so much when he started writing the first book. Talk about a doh moment. I’m a kid and I already know who I’m gonna marry when I grow up. This whole romance thing is super simple.

And when I asked him about it again, he was all, “It’s complicated.”

Get a clue, author person! Being a kid is hard. We have to learn all this new stuff in school. We have to do fifth-grade math! That’s complicated! I tried to tell him he could let Daddy and Marquetta get together right away and everybody would be totally cool with that.

I told him I should have a say in when Daddy and Marquetta get together. And he was like, I’ve got the computer and I do the typing. You know what I did, Journal?

I stuck my tongue out at him and told him I was holding the story hostage until he let them kiss. He was, like, super unhappy about that because he thought he was in control. We the characters, Journal. We’ve totally got this.