A Hole in One by Judy Penz Sheluk - Spotlight and Giveaway 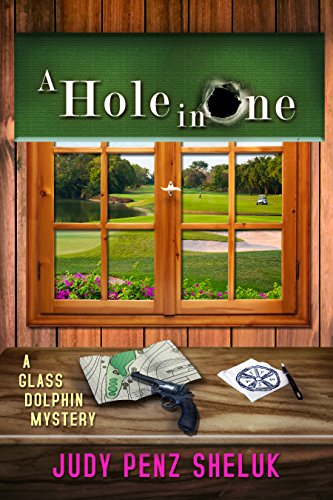 Book details
A Hole In One: A Glass Dolphin Mystery

Book description
Hoping to promote the Glass Dolphin antiques shop, co-owners Arabella Carpenter and Emily Garland agree to sponsor a hole in one contest at a charity golf tournament. The publicity turns out to be anything but positive, however, when Arabella’s errant tee shot lands in the woods next to a corpse.

They soon learn that the victim is closely related to Arabella’s ex-husband, who had been acting as the Course Marshal. With means, opportunity, and more than enough motive, he soon becomes the police department’s prime suspect, leaving Arabella and Emily determined to clear his name—even if they’re not entirely convinced of his innocence.

Dogged by incriminating online posts from an anonymous blogger, they track down leads from Emily’s ex-fiancé (and the woman he left Emily for), an Elvis impersonator, and a retired antiques mall vendor with a secret of her own.

All trails lead to a mysterious cult that may have something to do with the murder. Can Arabella and Emily identify the killer before the murderer comes after them?

and A HOLE IN ONE

) and The Marketville Mysteries (SKELETONS IN THE ATTIC

). Judy’s short crime fiction appears is several collections. She is a member of Sisters in Crime, International Thriller Writers, the Short Mystery Fiction Society, and Crime Writers of Canada, where she currently serves on the Board of Directors as the Regional Representative for Toronto/Southern Ontario. Find Judy on her website/blog at www.judypenzsheluk.com, where she interviews and showcases the works of other authors and blogs about the writing life.