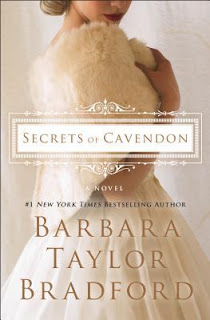 It’s the summer of 1949, and things have run smoothly at Cavendon Hall for years, with very few quarrels, dramas, or upsets between the two families. But since the end of World War II, changes have arrived at Cavendon. A new generation is at the helm, and also at the forefront of new scandal and intrigue. With romance, betrayal, heartbreak, and possible murder threatening to tear them apart, the Inghams and Swanns will have to find a way to come together and protect each other in the face of threats they never could have predicted.

Told with Bradford’s inimitable deftness of prose and a beloved cast of characters, Secrets of Cavendonis a captivating novel that will draw readers in and grip them until the very last page.

Meet the author - Barbara Taylor Bradford
BARBARA TAYLOR BRADFORD was born and brought up in England and started her writing career as a journalist. She has written more than thirty international bestsellers. Secrets of Cavendon is her thirty-second novel. In 2007, Queen Elizabeth awarded her the OBE (Order of the British Empire) for her literary achievements. She lives in New York with her husband, TV and film producer Robert Bradford.

My thoughts
This author is one of my favorite authors. I love that she writes about strong female ladies and this book is just as good as the first one she ever wrote. One of the things I like that the author does is she makes her stories historically accurate when telling them, as she captures the time and place of when and where it takes place. It was nice to see what was going on with the Inghams and Swans - it was like catching up with family. This book was full of romance, mystery, friendship, hardship and so much more. I am looking forward to the next book that Barbara Taylor has to offer us.
Posted by Angela - Bookaunt at Saturday, April 07, 2018