Lessons From the Prairie by Melissa Frances - Review 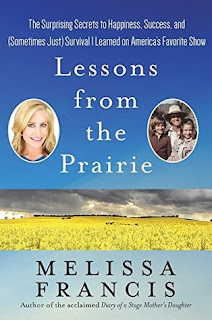 Book description
For fans of the beloved TV show Little House on the Prairie, a self-help book by Melissa Francis, bestselling author of Diary of a Stage Mother's Daughter and child star of Little House, revealing important life lessons inspired by a childhood on set.

Melissa Francis was only eight years old when she won the role of a lifetime: playing Cassandra Cooper Ingalls on the world's most famous prime-time soap opera, Little House on the Prairie.

Now in Lessons from the Prairie, she shares behind-the-scenes stories from the set, and lessons learned from the show's dynamic creator, Michael Landon, that have echoed throughout Melissa's adult life. With novel insights on hard work, making mistakes, and even spirituality, Francis shares inspirational and practical life lessons that will appeal both to her current TV fans, and fans of one of the most adored TV shows of all time.

Meet the author - Melissa Francis
Melissa Francis is an anchor, inspirational speaker, and host on the Fox Business Network and Fox News Channel, and a regular contributor on financial, economic, and political issues on shows such as The Five, Outnumbered, Happening Now, and America's Newsroom. Prior to her role at Fox, Melissa spent nine years at CNBC anchoring Power Lunch, The Call, and On the Money. She co-hosted It's the Economy on MSNBC with Contessa Brewer. She contributed to The Today Show, NBC Nightly News, and Weekend Today.

As an actress she appeared in numerous motion pictures, television series, and commercials. She is best known for her role of Cassandra Cooper Ingalls on Little House on the Prairie.

Melissa grew up in Los Angeles and earned an honors degree in Economics from Harvard University. She now lives in Manhattan with her husband and three children.

My thoughts
I have grown up not only loving the Little House on the Prairie books but I also enjoyed the tv show. I have spent many an hour watching reruns. So when I got asked to review a book by one of the actresses from the show I thought sure I would love that. I did like this book even though it did not have as much about her behind the scenes of Little House as I was expecting. That part was a little disappointing to me since I have so many books about Laura Ingalls and her life. But I did not let that keep me from enjoying the book. The author's stories were sometimes funny and always well told. I also thought she did a good job of making the reader feel relateable to her in her adventures through life.
Posted by Angela - Bookaunt at Saturday, April 07, 2018