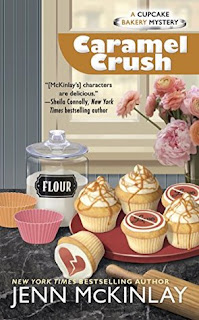 Book description
When a breakup via cupcake threatens to crumble their friend’s life for good, Mel and Angie race to solve the murder as this New York Times bestselling series continues…

Love is in the air at Fairy Tale Cupcakes as Angie prepares for her wedding, but co-owner, Mel, is preparing for a breakup. Her old friend, Diane Earnest, is dumping her fiancé after discovering he’s only marrying her for her money. She wants Mel to personally deliver a batch of caramel breakup cupcakes to the louse and give her a play-by-play of his reaction.

When Mel finally tracks the man down, the look on his face isn’t the reaction she was expecting: he’s dead. After the police arrive and see the incriminating cupcakes, Diane becomes their prime suspect. If she hopes to taste freedom again, Mel and Angie must make sure the real killer gets their just desserts…

Meet the author - Jenn McKinlay
Jenn McKinlay, the New York Times bestselling author of the Cupcake Bakery Mysteries (including Vanilla Beaned, Dark Chocolate Demise, and Sugar and Iced), has baked and frosted cupcakes into the shapes of cats, mice, and outer-space aliens, to name just a few. Writing a mystery series based on one of her favorite food groups (dessert) is as enjoyable as licking the beaters, and she can’t wait to whip up the next one. She is also the author of the Hat Shop Mysteries (Assault and Beret, Copy Cap Murder) and the Library Lover’s Mysteries (Better Late than Never, A Likely Story).

My thoughts
I love when I get to visit Mel, Angie and the gang at Fairy Tale Cupcakes. I have to agree with the gang as Angie was becoming quite the bridezilla at time as she is planning her wedding to Tate. After Mel feels she has to repay Diane an old debt she finds a dead body in the most unusual place. I really did not care for Diane and was angry when I found out the real story behind the debt Mel thought she owed. There was two people that I had in mind for the suspect but boy was I wrong. The author leaves a cliff hanger at the end of this book regarding Marty and now I can't wait to get to the next book.
Posted by Angela - Bookaunt at Tuesday, July 17, 2018