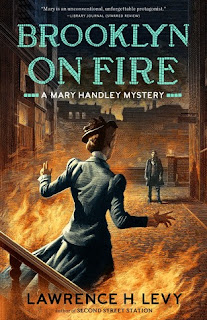 Synopsis:
Brooklyn’s most witty and daring detective risks everything to solve a dangerous triple-murder case

After closing a case with the Brooklyn Police Department, Mary Handley is determined to become an official detective in her own right. And when Emily Worsham shows up at her new office— convinced her uncle John Worsham was murdered and desperate for answers—Mary’s second assignment begins.

As she investigates the curious circumstances surrounding John’s death, Mary soon finds herself entangled in a high-stakes family scandal, a series of interconnected murders, political corruption, untrustworthy sources, and an unexpected romance with a central member of New York's elite.

Featuring historic figures like Andrew Carnegie, John D. Rockefeller, and the Vanderbilt family, Brooklyn on Fire takes Mary on a wild journey from New York City to North Carolina to uncover not only the truth of one man's death, but to unravel the mystery in three murders – with links tied perilously close to her own personal world.

What did I think of this book:
Again we get to go on an adventure with the fun Mary Handley. In this book she is bound and determined she is going to become an official detective. I loved that this edition had some famous historic figures in it. That is one of the things I like about this author's books is that she intertwines history into her mysteries. In this book Mary ends up having multiple murders to solve as the story goes along. It is fun to see all the adventures that Mary gets into along her journey of solving the mystery. I am looking forward to going on another adventure with Mary in the next installment in this series.

Abouth the author:
LAWRENCE H. LEVY is a highly regarded film and TV writer who is a Writers Guild Award winner and two-time Emmy nominee. He has written for various hit TV shows such as Family Ties, Saved by the Bell, Roseanne, andSeinfeld. Brooklyn on Fire is his second novel.
Posted by Angela - Bookaunt at Thursday, February 18, 2016