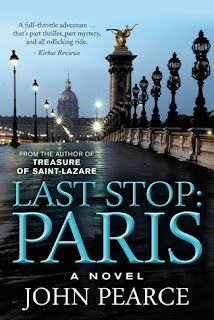 Synopsis:
A full-throttle adventure through modern Europe and the Mediterranean in a book that’s part thriller, part mystery, and all rollicking ride... An exhilarating journey that will satisfy the most avid thriller reader. Pearce again accomplishes every thriller writer’s aim: creating characters that the readers can root for and a believable, fast-paced storyline. The climax and denouement bring the storylines together neatly, but fans will see that there may yet be room for another book in the series

What did I think of this book:
I had the please of trying out a new author with this book. It was an action packed mystery that kept me on the edge of my seat. I could not wait to turn the page to see what was going to happen next. You can tell the author did his research and used his life experiences in Paris to write the setting. He did a great job in describing places so we could really feel a part of the story. He also made the characters believeable by having them make mistakes that everyday people make. Even though this is the second book in his series I was able to read this book as a stand alone and not feel lost. I am looking forward to reading more books by this author.

About the author:
ohn Pearce is a part-time Parisian who lives most of the the year in Sarasota, FL. He blogs at PartTimeParisian.com and invites you to subscribe.

He worked as a journalist in Washington and Europe, where he covered economics for the International Herald Tribune and edited a business magazine. After a business career in Sarasota, he spends his days working on his future books - The new one, Last Stop: Paris, was published Dec 1, 2015. It is a sequel to Treasure of Saint-Lazare.

Last Stop: Paris was a finalist in Shelf Unbound Magazine's "Best Indie Book of the Year" competition. Treasure of Saint-Lazare was chosen the best historical mystery of 2014 in the Readers' Favorite contest.

For several months each year, John and his wife Jan live in Paris, walk its streets, and chase down interesting settings for future books and his blog, PartTimeParisian.com. They lived earlier in Frankfurt, Germany, which gave him valuable insights for several of the scenes in Last Stop: Paris.

Email ThisBlogThis!Share to TwitterShare to FacebookShare to Pinterest
Labels: mystery, Pump up your book