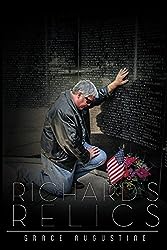 BLURB:
War and its remnants are cruel. Just ask Richard Dempsey, a Vietnam Vet. Richard served his turn in Vietnam, but came home a changed man. Plagued with nightmares of the past, Richard and his friends go on a life changing trip back to modern day Saigon. Their hope...to slay the dragons that stole so much of their lives. Each deals with his own demons. Each has life changing experiences. Each finds out the importance of friendship and family.

EXCERPT:
“Johnny! Goddamn it! Get down!” Richard yelled from his belly, the brush barely hiding him and the other four men on this clusterfuck of a mission. Just as the sound of gunfire erupted, Johnny hit the ground, not even a twitch from his body as bullets whizzed by like a thousand angry, deadly bees.  Richard kept his stomach French-kissing the ground as he crawled over to the young man who was in his charge. Blood covered Johnny’s chest and head. “Sonofabitch! Johnny, don’t you dare die on me! Do you hear me? Johnny!” Richard sprang to a sitting position and looked at the clock. The red digital numbers 3:00 am stared angrily back at him.   He ran a shaky hand through the small stubble of hair on his head. Like so many other mornings he woke up drenched in sweat from undying memories: memories of gunfire, yelling, children crying. Memories of clear unblinking eyes and permanent looks of fear frozen into faces as still as marble. The stench of death. Vietnam.

Internationally known author, Grace Augustine, was born in Shelby, Montana and grew up in Cut Bank, Montana (dubbed as The Coldest Spot in the Nation). Her work career has taken her from title and abstracting to administrative assistant church work to co-owning a small town weekly newspaper to her current profession as a floral designer.

Grace thinks of herself as a "Jill" of most trades and is not afraid to learn new things. "If you can't learn something new each day, there's something wrong," she says.

The ideas for her Acorn Hills series stem from her growing up years as well as the issues she has had to overcome along the way. "I've developed a new romance category...for the over 50 crowd...I'm calling it the salt and pepper genre. My books deal with real life issues, overcoming adversity, maintaining a positive outlook, and so much more. Just because we are 50 yrs old or older doesn't mean that life stops. We all still want attention and affection and adventure! We want to experience all life has to offer. We use our age as wisdom to share with those around us. We are sexual,sensual, and sensible," Grace explains.

Augustine was diagnosed with Multiple Sclerosis in July of 2003. Her thoughts on that "It may slow me down, but if I can at all do it, I will. Sitting and feeling sorry for yourself isn't the answer...living your life with an open, joy-filled heart is."