A Killer Ball at Honeychuch Hall by Hannah Dennison 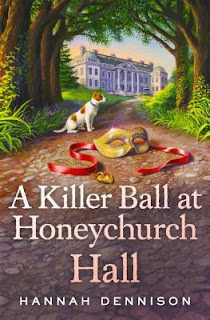 Synopsis:
When antique dealer Kat Stanford stumbles upon the partially mummified body of a young woman in an abandoned wing at Honeychurch Hall, suspicion falls on those who had been living there many years ago. And it appears that the deceased had been murdered. Given her mother Iris’s checkered past, Kat is not surprised to learn that Iris knew the victim.

Meanwhile, the unexpected appearance of former lothario Bryan Laney sets female hearts aflutter. Despite the passing years, time has not dampened his ardor for Iris, but the feeling is not reciprocated.

With stories of hidden treasure and secret chambers, past and present collide. As Kat becomes embroiled once more in her mother’s mysterious and tumultuous bygone days, she comes to realize that life is never black and white, and sometimes it is necessary to risk your own life to protect the lives of the ones you love.

What did I think of this book:
This was the first book in this series that I have read and the first book by this author. I did enjoy it and was able to read it as a stand alone but will be going back to read the first two in the series. I found the characters to be likeable and I even liked that there was a bit of history thrown into the story. The author did a good job of keeping you guessing up until the end of the book which always good in a mystery book. I also enjoyed the setting of this book - the nice little English town sounds like one that would be a nice getaway - as long as no murders happen while you are there. You also get a little of the Downton Abbey feel while reading this book only in a modern way. If you love English stories as I do then this is a fun book for you to pick up. I am looking forward to more books in this series.

About the author:
HANNAH DENNISON began her writing career as a trainee reporter for a small West Country newspaper in Devon, England. Hannah is a member of Sisters in Crime, Mystery Writers of America, the Willamette Writers, British Crime Writers' Association and Toastmasters International. Hannah Dennison is an especially big hit with librarians. Coincidentally her mother is a docent at Greenway, Agatha Christie's summer home, which has been turned into a museum. She is the author of Murder at Honeychurch.
Posted by Angela - Bookaunt at Tuesday, May 31, 2016