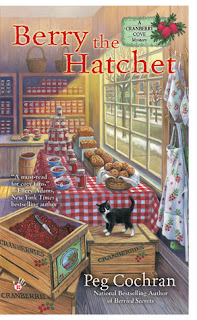 The entire town of Cranberry Cove is popping with excitement. Monica Albertson is baking cranberry goodies by the dozen and shopkeepers are decking out their storefronts for the first annual Winter Walk—an event dreamed up by the mayor to bring visitors to the town during a normally dead time of year.

But it’s the mayor who turns up dead during the grand opening ceremony, his lifeless body making its entrance in a horse-drawn sleigh. Monica’s mother and stepmother quickly become the prime suspects when it’s discovered that the mayor was dating both of them, and to make things worse, her half brother Jeff uncovers a clue buried near one of the bogs on Sassamanash Farm. Now it’s up to Monica to find out who really put the mayor on ice.

What did I think of this book:
I am so happy that I got the chance to visit Cranberry Cove again by reading this second book in the series. Peg's writing style flows nicely for me and I like how she keeps me guessing until the end of the book. I think it would be fun to stop by town and join in on the first annual Winter Walk although I would not like to find a dead person while doing so. Who would want to murder the mayor? That is what Monica sets out to find out especially since her mother and stepmother are the major suspects. I enjoy reading about this quaint little town and all the foods. It makes me wish I could live there. It would be fun to be friends with Monica and help her as she is trying to solve the town's mystery. I can't wait to see what the author has in store for us in the next book. You can read this book as a stand alone but it is so much better if you read the first book first.

About the author:
Mystery writing lets Peg indulge her curiosity under the guise of "work" (aka research). As a kid, she read the entire set of children's encyclopedias her parents gave her and has been known to read the dictionary. She put pen to paper at age seven when she wrote plays and forced her cousins to perform them at Christmas dinner. She switched to mysteries when she discovered the perfect hiding place for a body down the street from her house.

When she's not writing, she spends her time reading, cooking, spoiling her granddaughter and checking her books' stats on Amazon.

A former Jersey girl, Peg now resides in Michigan with her husband and Westhighland white terrier, Reg. She is the author of the Sweet Nothings Lingerie series (written as Meg London), the Gourmet De-Lite series, the Lucille series and now the Cranberry Cove series. Her newest series, the Farmer's Daughter, debuts with No Farm, No Foul in September 2016.
Posted by Angela - Bookaunt at Sunday, May 01, 2016