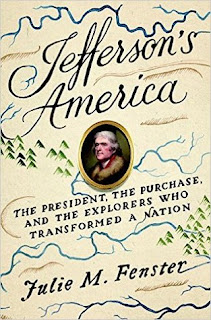 Synopsis:
The surprising story of how Thomas Jefferson commanded an unrivaled age of American exploration—and in presiding over that era of discovery, forged a great nation.

At the dawn of the nineteenth century, as Britain, France, Spain, and the United States all jockeyed for control of the vast expanses west of the Mississippi River, the stakes for American expansion were incalculably high. Even after the American purchase of the Louisiana Territory, Spain still coveted that land and was prepared to employ any means to retain it. With war expected at any moment, Jefferson played a game of strategy, putting on the ground the only Americans he could: a cadre of explorers who finally annexed it through courageous investigation.

Responsible for orchestrating the American push into the continent was President Thomas Jefferson. He most famously recruited Meriwether Lewis and William Clark, who led the Corps of Discovery to the Pacific, but at the same time there were other teams who did the same work, in places where it was even more crucial. William Dunbar, George Hunter, Thomas Freeman, Peter Custis, and the dauntless Zebulon Pike—all were dispatched on urgent missions to map the frontier and keep up a steady correspondence with Washington about their findings.

But they weren’t always well-matched—with each other and certainly not with a Spanish army of a thousand soldiers or more. These tensions threatened to undermine Jefferson’s goals for the nascent country, leaving the United States in danger of losing its foothold in the West. Deeply researched and inspiringly told, Jefferson’s America rediscovers the robust and often harrowing action from these seminal expeditions and illuminates the president’s vision for a continental America.

What did I think of this book:
I was excited to read this book as I wanted to learn a little more about Jefferson helped to expand our country. As well as I have been on a history kick lately and can't seem to get enough of American History. Not to mention I am wanting to also learn more about Jefferson. I enjoyed learning more about the other expeditions that Jefferson had planned other than Lewis and Clark which I know a lot about. The writing style of this author made this book easy to understand and read. Now I have to be honest and tell you that it took me just a little bit to get into this book but once I did I enjoyed it. You can tell the author did her research when writing this book. If you are looking for a book to help you understand how our country was formed then this is the book for you. I thought it was a very good history book.

About the author:
JULIE M. FENSTER is the author of many works of popular history, including The Case of Abraham Lincoln, Race of the Century, the award-winning Ether Day, and, with Douglas Brinkley, Parish Priest, which was a New York Times bestseller. She also co-wrote the PBS documentary First Freedom, about the founders and religious liberty. She lives in upstate New York.
Posted by Angela - Bookaunt at Monday, May 16, 2016