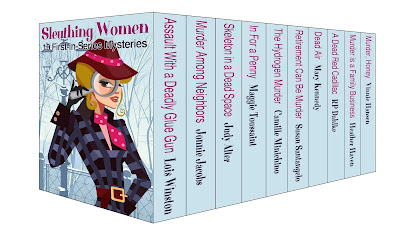 Synopsis
Sleuthing Women is a collection of 10 full-length mysteries featuring murder and assorted mayhem by 10 critically acclaimed, award-winning, and bestselling authors. Each novel in this set is the first book in an established multi-book series—a total of over 3,000 pages of reading pleasure for lovers of amateur sleuth, caper, and cozy mysteries.

ASSAULT WITH A DEADLY GLUE GUN

, an Anastasia Pollack Crafting Mystery by Lois Winston—Working mom Anastasia is clueless about her husband’s gambling addiction until he permanently cashes in his chips and her comfortable middle-class life craps out. He leaves her with staggering debt, his communist mother, and a loan shark demanding $50,000. Then she’s accused of murder…

SKELETON IN A DEAD SPACE

, a Kelly O’Connell Mystery by Judy Alter—Real estate isn’t a dangerous profession until Kelly O’Connell stumbles over a skeleton and runs into serial killers and cold-blooded murderers in a home being renovated in Fort Worth. Kelly barges through life trying to keep from angering her policeman boyfriend Mike and protect her two young daughters.

IN FOR A PENNY

, a Cleopatra Jones Mystery by Maggie Toussaint—Accountant Cleo faces an unwanted hazard when her golf ball lands on a dead banker. The cops think her BFF shot him, so Cleo sets out to prove them wrong. She ventures into the dating world, wrangles her teens, adopts the victim’s dog, and tries to rein in her mom…until the killer puts a target on Cleo’s back.

THE HYDROGEN MURDER, a Periodic Table Mystery by Camille Minichino—A retired physicist returns to her hometown of Revere, Massachusetts and moves into an apartment above her friends’ funeral home. When she signs on to help the Police Department with a science-related homicide, she doesn’t realize she may have hundreds of cases ahead of her.

RETIREMENT CAN BE MURDER

—A Baby Boomer Mystery by Susan Santangelo—Carol Andrews dreads her husband Jim’s upcoming retirement more than a root canal without Novocain. She can’t imagine anything worse than having an at-home husband with time on his hands and nothing to fill it—until Jim is suspected of murdering his retirement coach.

, A Talk Radio Mystery by Mary Kennedy—Psychologist Maggie Walsh moves from NY to Florida to become the host of WYME’s On the Couch with Maggie Walsh. When her guest, New Age prophet Guru Sanjay Gingii, turns up dead, her new roommate Lark becomes the prime suspect. Maggie must prove Lark innocent while dealing with a killer who needs more than just therapy.

, A Dead Red Mystery by RP Dahlke—When her vintage Cadillac is found tail-fins up in a nearby lake, the police ask aero-ag pilot Lalla Bains why an elderly widowed piano teacher is found strapped in the driver’s seat. Lalla confronts suspects, informants, cross-dressers, drug-running crop dusters, and a crazy Chihuahua on her quest to find the killer.

MURDER IS A FAMILY BUSINESS

, an Alvarez Family Murder Mystery by Heather Haven—Just because a man cheats on his wife and makes Danny DeVito look tall, dark and handsome, is that any reason to kill him? The reluctant and quirky PI, Lee Alvarez, has her work cut out for her when the man is murdered on her watch. Of all the nerve.

, a Carol Sabala Mystery by Vinnie Hansen—When the head chef collapses into baker Carol Sabala’s cookie dough, she is thrust into her first murder investigation. Suspects abound at Archibald’s, the swanky Santa Cruz restaurant where Carol works. The head chef cut a swath of people who wanted him dead from ex-lovers to bitter rivals to greedy relatives.

About Lois Winston
USA Today bestselling and award-winning author Lois Winston writes mystery, romance, romantic suspense, chick lit, women’s fiction, children’s chapter books, and nonfiction under her own name and her Emma Carlyle pen name. Kirkus Reviews dubbed her critically acclaimed Anastasia Pollack Crafting Mystery series, “North Jersey’s more mature answer to Stephanie Plum.” In addition, Lois is an award-winning craft and needlework designer who often draws much of her source material for both her characters and plots from her experiences in the crafts industry.

Guest Post:
From Gloria Lamerino
Ask me to put together a system to measure the spectral lines of hydrogen. I'll be happy to oblige. I know where I can get the right laser and detection system.

But please don't ask me to write an essay. Nothing makes me more nervous than that. I'm feeling that old classroom anxiety all over again. My college liberal arts teachers were always telling me my answers to questions were too short, not full enough, whatever that meant. In my major, mathematics, with a physics minor, an answer was an answer, no matter how few words or numbers it took.

But, to please my mentor, Camille Minichino, I've agreed to write about my life as a scientist and then, unexpectedly, as the partner of a homicide detective.

It all started when I decided to retire from my laboratory career in California and return home to Revere, Massachusetts. To ease the transition, Rose Galigani, my best friend from grade school, offered me an apartment above the funeral home she runs with her husband Frank. It seemed like a good idea until I realized the challenge it would be to do my laundry—it so happens that the washer/dryer set shares the basement with the embalming room. I found a Laundromat downtown pretty quickly. I still had to master the trick of walking past their "clients" laid out in the first floor parlors, and the chemical smells that are only partially masked by elaborate floral arrangements.

Rose and I couldn't be more close, or more different. I look more like the average woman from a chunky Italian-American family. Rose, with her auburn hair and petite figure looks like the Hollywood version. We even managed to stay close during my three decades in California, with frequent meetings on one coast or the other.

It was during one of those Christmas getaway weekends in Boston that I met Detective Matt Gennaro, a friend of the Galiganis, who is now my husband. Between then and now, we've had many adventures as I've been able to help him solve cases where science or scientists were involved.

There was the time one of my colleagues doing hydrogen research was murdered at his lab desk; and another when a congresswoman dealing with legislation on the United States helium reserves was the victim of a hit-and-run; and I recall helping solve the murder of a poor janitor working in a lithium battery facility; and then beryllium . . . well, you get the picture.

As I'm writing this, I'm working on a case at an aluminum recycling facility, my 13th case with the Revere Police Department. Matt just briefed me on the crime scene and the victim, a factory worker.

How does one go from a physics researcher to an amateur detective? You might be surprised to learn that the training is not that different. Not that I'm skilled with weapons or forensics, but a physicist has to be a problem solver, look for clues, and find the culprit when an experiment is going wrong—a stray electromagnetic pulse? An unexpected thermal gradient?

Not so different from sifting through theories of a homicide, looking both inside and outside the box to solve the problem and capture a killer.

Look at me! I've come up with more than 500 word, not as painful as I thought. Thanks for letting me share my passion for science and justice.

Maybe my next career will be essay writing.

The Hydrogen Murder by Camille Minichino is one of the books in Sleuthing Women: 10 First-in-Series Mysteries, a collection of full-length mysteries featuring murder and assorted mayhem by ten critically acclaimed, award-winning, and bestselling authors. Each novel in the set is the first book in an established multi-book series—a total of over 3,000 pages of reading pleasure for lovers of amateur sleuth, caper, and cozy mysteries, with a combined total of over 1700 reviews on Amazon, averaging 4 stars.

Camille Minichino, a retired physicist turned writer, is the author of more than twenty mystery novels in four series: the Periodic Table Mysteries; the Miniature Mysteries (as Margaret Grace); the Professor Sophie Knowles Mysteries (as Ada Madison); and the Postmistress Mysteries (as Jean Flowers). She has also written short stories and articles.

Camille is past president and board member of three major writers organizations and is currently serves on the Board of NorCal MWA. She teaches writing in the San Francisco Bay Area. Visit her at www.minichino.com