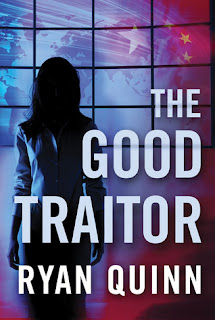 Synopsis:
The US ambassador to China is killed in a suspicious plane crash just days after a news article links Chinese spies to US business interests. The American intelligence community is left scrambling to investigate possible connections between the crash and a series of other high-profile deaths.

On the other side of the world, ex-CIA operative Kera Mersal returns to the United States determined to clear her name after being branded a traitor for exposing illegal government surveillance. There, former colleague and fellow fugitive J. D. Jones contacts her with a new assignment: find out who is staging accidents to murder news sources. As the news site continues to publish stories about top-secret CIA programs and Chinese government corruption, Mersal reunites with old allies to uncover the truth and prove her loyalty to her country once and for all. But Mersal’s investigations put her on the trail of a sinister hacker whose own motives may influence a vaster—and more deadly—geopolitical conspiracy than either of the world’s two largest superpowers is prepared to handle.

What did I think of this book:
I thought this was a good book. It was a little too real life for me but that is not to say the author did not do a good job. Rather he did in making this seem like something that could happen. I thought the book was steady in pace and was not lacking for content. You can tell the author does his research in writing. I have to agree with another reader and say that this book was intense. You can feel a sense of danger for the characters as you are reading this. This is a second book in a series but you can read it as a stand alone. If you enjoy techno-thriller mysteries then this is the book for you.

About the author:
A native of Alaska, Ryan Quinn was an NCAA champion and an all-American athlete in skiing while at the University of Utah. He worked for five years in New York’s book-publishing industry before moving to Los Angeles, where he writes and trains for marathons. Quinn’s first novel, The Fall, was an award-winning finalist for the 2013 International Book Awards.