A Golden Cage by Shelley Freydont - Review and Giveaway 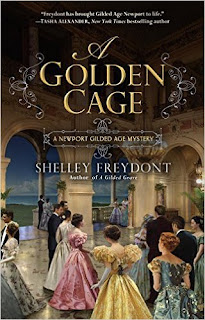 Synopsis:
The author of A Gilded Grave returns to Newport, Rhode Island, at the close of the nineteenth century, where headstrong heiress Deanna Randolph must solve another murder among the social elite.

With her mother in Europe, Deanna is staying with the Ballard family, who agree to chaperone her through the summer season and guide her toward an advantageous marriage proposal—or so her mother hopes. Relishing her new freedom, Deanna is more interested in buying one of the fashionable new bathing costumes, joining a ladies’ bicycling club, and befriending an actress named Amabelle Deeks, all of which would scandalize her mother.

Far more scandalous is the discovery of a young man bludgeoned to death on the conservatory floor at Bonheur, the Ballards’ sumptuous “cottage.” Deanna recognizes him as an actor who performed at the birthday fete for a prominent judge the night before. But why was he at Bonheur? And where is Amabelle?

Concerned her new friend may be in danger—or worse—Deanna enlists the help of her intrepid maid, Elspeth, and her former beau, Joe Ballard, to find Amabelle before the villain of this drama demands an encore.

What did I think of this book:
This was a fun book for me as it included two of my favorite things history and mystery. We get to go on another adventure with Deanna and then what does she stumble upon but a dead body. Following Deanna, Elspeth and Joe on their journey to find Amabelle before it is too late was quite the adventure. I like how the author gives us enough clues to make us think we know what is going on then her comes another twist. The descriptions that Shelley uses are very good as I feel as if I am right there alongside the characters. I will be looking forward to the next book in this series to see what adventures we get to go on next.

About the author:
Shelley Freydont is the author of the Liv Montgomery, Celebration Bay Festival Mysteries, (Silent Knife

Shelley loves puzzles of all kinds and when not writing or reading mysteries, she’s most likely working on a jigsaw, Sudoku, or crossword.

As Shelley Noble, she’s the author of the women’s fiction novels, Beach Colors

as well as several novellas.

She lives at New Jersey Shore and loves to hear from readers. www.shelleyfreydont.com www.facebook.com/ShelleyFreydont