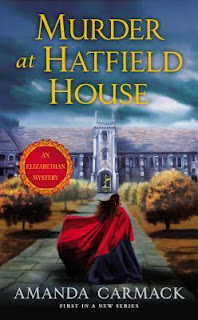 Synopsis:
1558. Kate Haywood, a simple musician in the employ of a princess, will find herself involved in games of crowns as she sets out to solve the murder of the queen’s envoy....

England is in tumult under the rule of Queen Mary and her Spanish husband. Confined to house arrest at Hatfield House, young Princess Elizabeth is the country’s greatest hope. Far from court intrigues, Elizabeth finds solace in simple things: the quiet countryside and peaceful recreation, including the melodies of her chief musician and his daughter, Kate Haywood.

But Kate will prove herself most valuable when an envoy of the queen—sent to flush out heretics in the princess’s household—is found dead on the grounds of Hatfield. Acting as Elizabeth’s eyes and ears, Kate is sent out on the trail of a killer whose mission could destroy her family, friends—and the future of England.

What did I think of this book:
I really enjoyed this first book in this new to me series. It was kind of fun to see Elizabeth in a different setting than the normal historical fiction I have read about her. Of course my favorite character of this story is Kate. She is so trusting, friendly and wants to help everyone. Her dad seems like such a sweet old man and you can not help but feel bad for him with his health. There are two men who both like Kate - Anthony and Rob - I am cheering for a relationship between Kate and Anthony in later books but will have ot wait and see what the author has in store for us. There were some evil characters in this story as well like Lord Braceton - who was dead set on destroying lives no matter what. When Kate was searching for the killer it had to be hard to figure things out while trying to stay safe in a time when it was hard to stay safe. I also liked the little addition of the ghostly characters I thought they added to the story. I had no clue that the killer would have ended being who it was - which was good writing on the author's part. I will be reading the rest of this series in the next month so watch for the reviews.

About the author:
Amanda has been in love with the Tudors ever since an accidental viewing of "Anne of the Thousand Days" on TV as a kid! Now she just wishes she could live with them all the time--but there has to be time for writing about them too.

She also writes as Amanda McCabe and Laurel McKee, and her books have been nominated for many awards, including the RITA Award, the Romantic Times BOOKReviews Reviewers' Choice Award, the Booksellers Best, the National Readers Choice Award, and the Holt Medallion. She lives in Oklahoma with a menagerie of two cats, a Pug, and a very bossy miniature Poodle, along with far too many books.When not writing or reading, she loves taking dance classes, yoga, collecting cheesy travel souvenirs, and watching the Food Network--even though she doesn't cook.You can also visit Amanda's website here
Posted by Angela - Bookaunt at Monday, June 20, 2016