Dawn of LIberty by Amber Schamel - Review and Giveaway 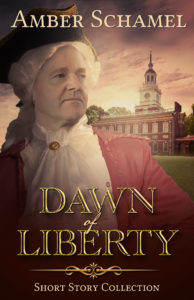 Synopsis:
Liberty comes with a price. Can a fledgling nation bear the cost?

British forces advance upon a struggling colonial army. The time of decision has come. Declare independence, or give up the fight. The weight of a nation rests on Samuel Adams’ shoulders as he joins the delegates of the Second Continental Congress. Can he raise the cause of Liberty above the fear of the King’s wrath in the hearts of his countrymen?

Three riveting short stories follow Samuel Adams as he struggles through the events surrounding the Declaration of Independence and evokes the Dawn of Liberty.

Dawn of Liberty
Liberty hangs in the balance. With Pennsylvania’s vote divided, the declaration may not pass. Samuel Adams has two hours to convince the delegates to pass the document, or the lives sacrificed for freedom will be worthless.

A Shot at Freedom
“The Regulars are coming!”

Samuel Adams is awakened by Revere’s cry of alarm. A large force of British soldiers are marching on Lexington to seize him and his compatriot John Hancock. Adams and Hancock encourage the militia to make a stand against the Regulars, but should they stay and join the fight, or escape to safety?

Travail of a Nation
Samuel Adams felt the weight of the nation resting on his shoulders as he and his cousin entered the Pennsylvania State House. If the declaration did not pass today, their chances at ever truly gaining independence were all but lost. The British forces bound to arrive in New York any day would crush their revolution if it was not bolstered by a formal declaration. The “Travail Of A Nation” has begun…

What did I think of this book:
This book jumped out at me as I have been wanting to read more about Samuel Adams. I am a huge fan of the Revolutionary War time period and here lately can not get enough of it. In this book we get a set of three short stories that tell the story of Sam Adams and the Declaration of Independence. Since these are short stories the entire book reads very quickly. The only complaint that I have is the author left me wanting more. I enjoyed her writing style and felt as if the story came alive off the pages. For me I felt as if I was transported back to a different time period while reading. You can tell that the author did her research when writing this book as it showed in the details. I can not imagine what it would have to live through this time and fighting for not only your own freedom but the entire countries freedom. I will definately be watching for more books by this author.

About the author:
Author of over half a dozen books, Amber Schamel writes riveting stories that bring HIStory to life. She has a passion for travel, history, books and her Savior. This combination results in what her readers call “historical fiction at its finest”. She lives in Colorado and spends half her time volunteering in the Ozarks. Visit her online atwww.AmberSchamel.com/

Guest Post:
On July 4th, 2016, Americans across the nation will celebrate the 240th anniversary of the signing of the Declaration of Independence. Besides the basic overview you got in history class, how much do you really know about the document and the men that signed it?

As an American and a history nerd, I was upset when I realized how much I didn’t know the struggle these men went through, who they really were, what they felt, and what they were putting on the line when they signed their name to that document. There are SO many inspiring stories in the signers and founding fathers, so when I began looking at which signer to feature in Dawn of Liberty, it was a tough decision to pick only one. One of the signers was terminally ill and rode unthinkable miles through the rain to be there in time to sway the vote. Most were away from their homes and families for incredible amounts of time. Some sacrificed fame and fortune.

But after looking through all of the names, I ended up with Samuel Adams. Sam is such a passionate and inspiring character, and I really related to him. He voiced his passion for freedom and independence before the idea was popular, spent countless nights writing articles and pamphlets promoting the cause, always held faith and optimism that someday the Colonies would be free from the tyranny of England. His character is so intriguing and inspiring…Yet, Sam is only known as a beer brand.

Talk about infuriating a history nerd!

Sam Adams is a patriot and a hero. The more I learned and read about him, the more I liked him. Americans should know Sam for who he really is, rather than as the icon to sell liquor. That’s why I am so excited for people to meet Sam in DAWN OF LIBERTY. These stories give folks a chance to experience the tension in Philadelphia at the time of the signing, meet some of the signers, and feel the weight of the decision placed in their hands. It is my hope that this collection of short stories will make the signers more than just portraits in a history book. By the time you finish reading it, my prayer is that you feel you know Sam and his compatriots as friends. 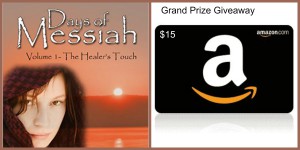 To celebrate her tour, Amber is giving away a signed copy of The Healer’s Touch and a $15 Amazon Gift Card! Enter to win here: https://promosimple.com/ps/9ccf