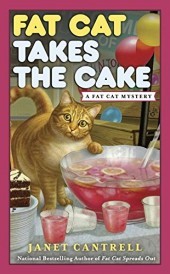 Synopsis:
Quincy the butterscotch tabby has a talent for sniffing out sweets—and uncovering crimes—in this Fat Cat mystery from the national bestselling author of Fat Cat Spreads Out.

When former classmate Rich “Dickie” Byrd throws a high school reunion to gather support for his mayoral campaign, it drums up some not so sweet memories for dessert shop proprietor Chase Oliver and her friend Julie Larson. Julie would rather not reconnect with Ron North, the creepy kid who had a crush on her back in the day. His social graces haven’t exactly improved with age, but is he creepy enough to kill?

The next day, Chase is in the park testing a new cat harness for Quincy—who quickly proves he cannot be leashed. But when his escape leads Chase to Ron’s body, the police wonder who else got away. Now, with Julie suspected, Chase must prove her innocence before the real killer plans another fatal reunion.


What did I think of this book:
I am going to start out by telling you this is the first book I have read in this series. I was not at all lost but I did go out this weekend and buy the other two books so I can do some catching up. The title of these books crack me up as that is what we call one of our cats. This was a fun book to read and I do not know why I did not start this series sooner. Quincy is such a character in his own right. His antics remind me so much of our cats. Then you have the mystery which the author gives you enough clues to think you have it figured out only to find out no you don't. I like how I was kept on the hook until the end of the book. There is a lot going on this time of year for Chase that her life is just crazy. It was fun following along with her. This was a quick read and I look forward to more books by this author.

About the author:
Janet Cantrell is a pen name for Kaye George, Agatha nominated novelist and short story writer. She belongs to Sisters in Crime, Guppies, and Austin Mystery Writers. Her cozy Fat Cat mystery series debuts in September of 2014 with FAT CAT AT LARGE, featuring Quincy, a pudgy, adorable cat who is an accomplished escape artist. Especially when he’s on a diet and hungry. Leave it to Quincy to lead his human, Chase, co-owner of a Minneapolis dessert bar shop, into trouble. Janet lives in Knoxville TN with her husband. Her recently departed feline, Agamemnon, is a source for some of Quincy’s antics.
Posted by Angela - Bookaunt at Monday, June 13, 2016