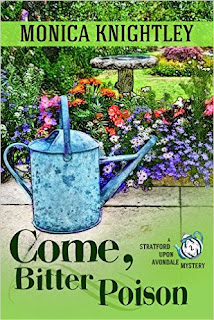 When international stage and film star Miles Elliot comes to Stratford Upon Avondale to play Macbeth, Maggie O’Flynn is thrilled. He’s been her actor crush for years. But when Miles ends up at the center of a murder investigation Maggie finds herself slipping back into the role of amateur sleuth. Before long many of her friends become suspects in not just one murder, but two. Maggie must discover who’s poisoning people associated with the Shakespeare Festival before one of her friends gets slapped with a murder charge. And she must do so while dodging paparazzi that are stalking her due to a supposed love affair she’s having with Miles Elliot.

With a bit of Shakespeare, copious amounts of tea, and a faux-English setting to rival anything the real England has to offer, COME, BITTER POISON

is the second book in THE STRATFORD UPON AVONDALE

mystery series. Though part of a series, COME, BITTER POISON

can be read and enjoyed as a standalone. Lovers of cozy mysteries will find a cozy home in Stratford Upon Avondale.


About the author:
Monica Knightley began creating compelling characters and stories at the age of three, when she had a plethora of imaginary friends, all with complete backstories. Today any characters that come knocking on the door of her imagination find themselves in one of her mysteries, young adult novels, or paranormal romances.

When not fueling her reading addiction or writing her next book, Monica loves to travel with her husband—especially to England. A bit of England seems to make its way into most of her books. Must haves include a perfectly steeped cup of tea, and a good, bold red wine. She lives in Portland, Oregon where the frequent rainy weather is perfect for curling up with a good book and a cup of tea.

Hello, I’m Maggie O’Flynn, proprietress of the Merry Wives Tea Room, here in Stratford Upon Avondale. Though I write steamy romances when I’m not serving copious amounts of tea, I’ve never been a blogger, so I hope you’ll bear with me.

When I moved here to this über faux-English village I knew I’d see more than my share of murder. And treachery. And duplicity. But I thought it would be on the stages of the town’s world-renowned Shakespeare Festival. I certainly didn’t expect actual murders, but there have been a few in the short time I’ve lived here. Had I known, I might have reconsidered my move. And somehow I’ve managed to get caught up in a couple of the murder investigations. I have to confess that I enjoy the fact that I’m becoming quite the amateur sleuth, even if the local gendarmes don’t appreciate my deductive skills. I can just imagine Sister Mary Josephine admonishing me for putting my nose where it doesn’t belong.


That’s the other thing about me I should divulge. I used to be a nun. Well, not a full nun, just a nun-in-training. After five long years of trying to be a nun I left with the blessing of the sisters. It was agreed by all involved that Sister Margaret Rose O’Flynn was never meant to be.

When I left the convent there were a lot of things I wanted to escape in my hometown of Philadelphia, which is why I moved all the way out to a West Coast state. I also had some catching up to do, if you catch my drift. Hence the romance novel writing. There’s been a fair amount of dating to catch up on too. Currently I have my eye on the owner of the bookshop next door to my tea room. Nate Larimer. The man looks like a romance novel cowboy—all he needs is the hat and a pair of chaps. Unfortunately, something about my past as a nun-in-training and the fact that I write steamy romances seems to be scaring him off. Sigh…

The folks in this little village that looks like it was just lifted right out of Tudor England, have been very welcoming. Yes, they are a quirky bunch, but I seem to fit in with quirky just fine. My best friend and amateur-sleuthing sidekick, is a perfect example. Gina Mattucci is a loud, brash, ball of fire originally from New Jersey. She seems to be under the illusion that while living in Jersey she had some nebulous ties or associations to the mob, but I know she’s delusional. I’m sure she grew up surrounded by a big Italian family with dinners with the grandparents every Sunday night.

Murders aside, life in Stratford Upon Avondale suits me well. Or maybe because of the murders, life here suits me well. I spend my days making delicious tea treats and serving them with pots of fragrant tea to my customers. Nights are for writing, or taking in a play, or trying to cozy up to Nate. Everything in between seems to be for solving murder mysteries. Yes, that’s a pretty good life.