Meet Me in Scotland by Patience Griffin - Review 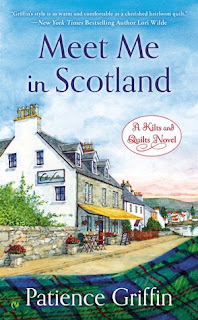 Synopsis:
You can run from your problems, but you can’t hide from love in the Scottish seaside town of Gandiegow...

When a video of her calling happily ever after “a foolish fantasy” goes viral, marriage therapist Emma Castle is out of a job—and off to Scotland. The tiny town of Gandiegow is the perfect place to ride out the media storm and to catch up with her childhood friend Claire. But also in Gandiegow is the one man she hoped never to see again.

She’s successfully avoided Gabriel MacGregor since Claire and Dominic’s wedding, only to find he’s now the village doctor—and just as tall, dark, and devilish as ever. Claire and Dominic’s blissful marriage, however, is not what it used to be. Soon Emma and Gabriel find themselves taking sides even as the sparks begin to fly between them. Can Emma help her friends—or regain her career—as she struggles with her own happily ever after?

What did I think of this book:
This is the second book in a enjoyable series. I have to say I liked this one even better than the first one. We got to see a few characters from the first book which was nice. I like that Cait has settled into her role as a mom and that Deydie is still the town boss. Oh and I can't forget that little Mattie makes an appearance and plays a nice part in this book. I would just love to hug this little boy. Then we got to meet new characters. I loved Emma and Gabriel from the time they stepped onto the pages. I felt bad for Emaa as her parents were such horrible mean people and basically forced her to do things that she did not want to do and to feel a way she did not want to feel. I can't imagine growing up hearing your parents say the things about kids that they did. Then we have Gabriel. Although he was from Scotland he was considered an outsider/outlander because he was not from Gandiegow. Some from the town were not accepting of him. Then we got to meet Claire and Dom. Claire made me so mad with her antics and lies she told all because she wanted a baby. So for of course I did not like her. I felt horrible for Don and the way Claire and the town were treating him because he did not want a baby. This book made me smile, mad and gave me a lump in my throat. For me that makes it a great book. I am looking forward to starting the next book in the series very soon. If you are a fan of Robyn Carr's or Sheila Robert's books then you will enjoy this series. Highly recommended.

About the author:
Award-winning author Patience Griffin has been sewing her whole life but didn’t discover her love of quilting until her late thirties. She decided the best way to acquire her first quilt was to make one for herself. At nearly the same time, she started commuting three and half hours a day for her dream engineering job. To pass the time on the long drive, she got hooked on audiobooks—especially books with love stories. Within a couple of years, she was writing stories of her own. It was no surprise to her family and friends when she combined her love of quilting, her small town roots, and her obsession with Scottish romances into novels. She has gained some recognition with her September 11th Story Quilt which has toured the country as the property of the Pentagon. She has a master's degree in nuclear engineering but spends her days writing stories about hearth and home, and dreaming about the fictional small town of Gandiegow, Scotland