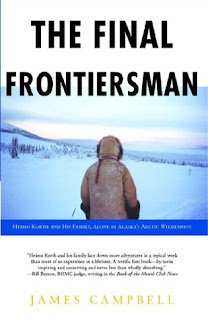 Synopsis:
The inspiration for The Last Alaskans—the eight-part documentary series on Animal Planet! Called “[one of] the greatest life-or-death-tales ever told” (Esquire), James Campbell’s inimitable insider account of a family’s nomadic life in the unshaped Arctic wilderness “is an icily gripping, intimate profile that stands up well beside Krakauer’s classic [Into the Wild], and it stands too, as a kind of testament to the rough beauty of improbably wild dreams” (Men’s Journal).

Hundreds of hardy people have tried to carve a living in the Alaskan bush, but few have succeeded as consistently as Heimo Korth. Originally from Wisconsin, Heimo traveled to the Arctic wilderness in his feverous twenties. Now, more than three decades later, Heimo lives with his wife and two daughters approximately 200 miles from civilization—a sustainable, nomadic life bounded by the migrating caribou, the dangers of swollen rivers, and by the very exigencies of daily existence.

In The Final Frontiersman, Heimo’s cousin James Campbell chronicles the Korth family’s amazing experience, their adventures, and the tragedy that continues to shape their lives. With a deft voice and in spectacular, at times unimaginable detail, Campbell invites us into Heimo’s heartland and home. The Korths wait patiently for a small plane to deliver their provisions, listen to distant chatter on the radio, and go sledding at 44° below zero—all the while cultivating the hard-learned survival skills that stand between them and a terrible fate.

Awe-inspiring and memorable, The Final Frontiersman reads like a rustic version of the American Dream and reveals for the first time a life undreamed by most of us: amid encroaching environmental pressures, apart from the herd, and alone in a stunning wilderness that for now, at least, remains the final frontier.

My thoughts:
Scott and I are fans of the tv show The Last Alaskans so I thought it would be nice to learn more about my favorite family. Heimo and Edna seem like such geniune loving and nice people and after reading this book I have even more respect for both of them. The story starts with Heimo in his home town of Appleton, Wisconsin and moves on to his dream of moving to Alaska and how he came to live in the bush. Let me tell you it takes a very strong person to do what he has done. It is not for everyone. I found this quote in the book about people who move to Alaska and loved it - they call these people sourdoughs "soured on this country and ain't go no dough to get out" Makes a lot of sense to me. Alos they say if you live in Alaska two years your feet will be frozen in. Heimo happens to be one of only seven people with a cabin permit in the Artic National Wildlife Refuge which is 19.5 million acres. Out of those seven he is the only one who is a permanent resident. I liked how there was a little history of the Eskimos included and it made me very angry to see they were treated just as bad if not worse than the Native Americans in the lower 48. In fact over 2/3 of the tribes were descimated. All for greedy people. For me this was a good, very informative book and am happy that I took the time to read it.

About the author:
Author, adventurer and producer James Campbell is a native of Wisconsin, where he lives with his wife and three daughters. He has written stories for Outside, National Geographic Adventure, Military History, Backpacker, Audubon, Field and Stream, and many other magazines and newspapers. His first book, The Final Frontiersman was chosen by Amazon in 2004 as the #1 Outdoor title of the Year and one of the Top 50 books of the Year and by the Midwest Booksellers Association as one of the Top 2 nonfiction titles of the year. His fascination with New Guinea and the war in the South Pacific led him to the story of the 32nd Division, the Ghost Mountain Boys, and his book of the same name. In 2006, he followed the route of the Ghost Mountain Boys across New Guinea -- a journey that historians describe as "one of the cruelest in military history" -- and shot a documentary film in the process. His story, “Chasing Ghosts,” about that expedition, which appeared in the May 2007 issue of Outside magazine, was chosen for The Best American Travel Writing 2008. The Ghost Mountain Boys: Their Epic March and the Terrifying Battle for New Guinea – the Forgotten War of the South Pacific was chosen as a Book-of-the-Month Club selection and History and Military BOMC selections. It also won the 2008 RR Donnelley Literary Award, given for the highest literary achievement by a Wisconsin author. Campbell’s newest book, Braving It: A Father, A Daughter, and an Unforgettable Journey into the Alaskan Wild will be released by Penguin-Random House in May 2016.

Campbell is the co-Executive Producer of the Discovery Channel series, The Last Alaskans, which was inspired by his first book, The Final Frontiersman.
Posted by Angela - Bookaunt at Sunday, August 21, 2016