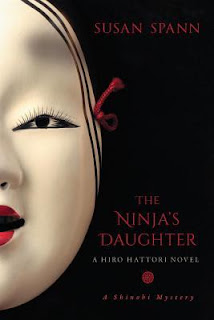 Synopsis:
Autumn, 1565: When an actor’s daughter is murdered on the banks of Kyoto’s Kamo River, master ninja Hiro Hattori and Portuguese Jesuit Father Mateo are the victim’s only hope for justice.

As political tensions rise in the wake of the shogun’s recent death, and rival samurai threaten war, the Kyoto police forbid an investigation of the killing, to keep the peace–but Hiro has a personal connection to the girl, and must avenge her. The secret investigation leads Hiro and Father Mateo deep into the exclusive world of Kyoto’s theater guilds, where they quickly learn that nothing, and no one, is as it seems. With only a mysterious golden coin to guide them, the investigators uncover a forbidden love affair, a missing mask, and a dangerous link to corruption within the Kyoto police department that leaves Hiro and Father Mateo running for their lives.

My thoughts:
I thought this was a good addition to this series.  It has been fun to follow ninja Hiro on the journeys in each book and solving the mysteries along the way. This time Hiro has be extra careful when looking for clues as the police have forbidden an investigation. I have not read any books in this time period and the only books I author's books. I enjoyed the book and they mystery but I did not really care for all the political parts. But that does not take away from the story that part is just not for me. If you are a fan of historical mysteries and are looking for a good book that does not follow the typical mold of cozy mysteries then I suggest you pick this book up.

About the author:
Susan Spann is a transactional publishing attorney and the author of the Shinobi Mysteries, featuring ninja detective Hiro Hattori and his Portuguese Jesuit sidekick, Father Mateo. Her debut novel, CLAWS OF THE CAT (Minotaur Books, 2013), was named a Library Journal Mystery Debut of the Month. Susan has a degree in Asian Studies from Tufts University, where she studied Chinese and Japanese language, history, and culture. Her hobbies include cooking, traditional archery, martial arts, and horseback riding. She lives in northern California with her husband, son, two cats, and an aquarium full of seahorses. 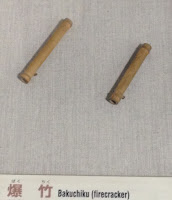 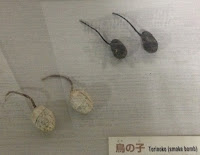 When I started writing the Hiro Hattori (Shinobi) mysteries, I faced a bigger challenge than “just” creating a new and intriguing mystery in each new book: I had to equip my detective, Hiro Hattori, with a wide enough range of ninja skills and weapons to keep readers excited and turning pages.

Fortunately, real historical ninjas (also called “shinobi”) possessed a striking number of special weapons and trained in multiple forms of combat. Each ninja—male and female—trained in the use of hand-held and projectile weapons, along with disguises and stealth, which allowed them to function as both spies and assassins in the field.

In each new novel, I arrange for Hiro to use a different shinobi weapon or technique. This keeps the series fresh and also lets the readers experience a broader range of equipment and tactics used by real ninjas.

For example, in last year’s Flask of the Drunken Master Hiro used bamboo bombs to blow up a pair of lanterns. Real ninjas constructed explosives by filling hollow bamboo tubes with incendiary materials. Here’s a photograph of real ninja explosives on display at the Iga Ninja Museum in Japan:

Explosives make a minor appearance in the newest Hiro Hattori novel, The Ninja’s Daughter, too—but in a dramatically different way, and Hiro isn’t the one who employs them.

In some of the other novels in the series, Hiro also shuriken—commonly known as “throwing stars” or “ninja stars”—though not in the way most movie ninjas use them. While some varieties of shuriken were used as throwing weapons, many medieval ninjas (including Hiro) used them as fistload weapons. In fact, the shuriken’s star-shaped design makes it an ideal weapon to use in a fist—the fingers close around the weapon’s core, allowing the spikes to protrude between the fingers, adding deadly power to a punch.

As you can see from the picture above, real shuriken came in a wide variety of shapes and sizes, not only the traditional “star” popularized in ninja movies.

For The Ninja’s Daughter, I wanted to highlight another of Hiro’s weapon skills, which he shares with many historical ninjas: swordsmanship.

In 16th century Japan, only samurai were allowed to carry swords in the open. Since Hiro comes from a samurai family (as well as being shinobi), he carries the traditional pair of swords: the longsword (katana) and a shorter sword known as a wakizashi. Like all samurai, my protagonist trained to use the swords alone as well as together, and can fight either way, as the situation requires.

The Ninja’s Daughter involves the death of an actor’s daughter and a forbidden investigation, at a time when Kyoto has grown increasingly dangerous in the wake of the shogun’s recent death. Between them, them plot and the setting offered more than a few opportunities for Hiro to use his blades.

Fortunately, historical ninjas used such a wide variety of weapons and tactics that I could write dozens of mystery novels without touching on them all. From caltrops to lockpicks, and “water shoes” to poisoned darts, the real ninjas’ arsenal puts even Hollywood to shame . . . and I can’t wait to put them in Hiro’s hands in the books to come!