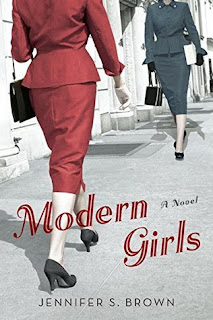 How was it that out of all the girls in the office, I was the one to find myself in this situation? This didn’t happen to nice Jewish girls.

In 1935, Dottie Krasinsky is the epitome of the modern girl. A bookkeeper in Midtown Manhattan, Dottie steals kisses from her steady beau, meets her girlfriends for drinks, and eyes the latest fashions. Yet at heart, she is a dutiful daughter, living with her Yiddish-speaking parents on the Lower East Side. So when, after a single careless night, she finds herself in a family way by a charismatic but unsuitable man, she is desperate: unwed, unsure, and running out of options.

After the birth of five children—and twenty years as a housewife—Dottie’s immigrant mother, Rose, is itching to return to the social activism she embraced as a young woman. With strikes and breadlines at home and National Socialism rising in Europe, there is much more important work to do than cooking and cleaning. So when she realizes that she, too, is pregnant, she struggles to reconcile her longings with her faith.

As mother and daughter wrestle with unthinkable choices, they are forced to confront their beliefs, the changing world, and the fact that their lives will never again be the same….

My thoughts:
This is not a time period that I normally read but I wanted to give it a try. I have to say that I was impressed with the story and the writing style of this author. This is a great story about mothers and daughters. It was a book that grabs you on page one and does not leave you until the last page. I really had to feel bad for Dottie in her situation especially in that time period as that was not as common or as accepted as today. Then her mom ended up also pregnant and the two had a deeper bond. All in all I thought this was a very good book and am very happy that I read it. The author did a good job of describing the setting and era so you really got a sense of where and when this takes place. There is something about it that just made me feel proud of both Dottie and her mom. It is a book that tells just how strong women can be and how they could survive tough times with the support of each other. I suggest that you take a chance on this book.

About the author:
Jennifer S. Brown has published fiction and creative nonfiction in Fiction Southeast, The Best Women’s Travel Writing, The Southeast Review, The Sierra Nevada Review, and the Bellevue Literary Review, among other places. Her essay “The Codeine of Jordan” was selected as a notable essay in The Best American Travel Writing in 2012. She holds an M.F.A. in creative writing from the University of Washington.
Posted by Angela - Bookaunt at Sunday, August 07, 2016