The Valley by Helen Bryan - Review 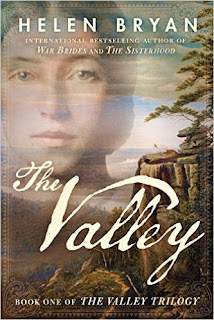 Synopsis:
Left suddenly penniless, the Honorable Sophia Grafton, a viscount’s orphaned daughter, sails to the New World to claim the only property left to her name: a tobacco plantation in the remote wilds of colonial Virginia. Enlisting the reluctant assistance of a handsome young French spy—at gunpoint— she gathers an unlikely group of escaped slaves and indentured servants, each seeking their own safe haven in the untamed New World.

What follows will test her courage and that of her companions as they struggle to survive a journey deep into a hostile wilderness and eventually forge a community of homesteads and deep bonds that will unite them for generations.

The first installment in an epic historical trilogy by Helen Bryan, the bestselling author of War Brides and The Sisterhood, The Valley is a sweeping, unforgettable tale of hardship, tenacity, love, and heartache.

My Thoughts:
As a fan of historical fiction books set in this time period I thought it be nice to give a new to me author a chance. I was not disappointed. This book hooked me from the first page and kept me interested until the very end. The author did such a good job with her descriptions that I felt as if I was on the boat with Sophia coming to the New World. Sophia was a strong woman who had to endure a lot in her lifetime but I believe it only made her stronger. You can tell the author did her research when writing this book as it showed in her writing. She did a good job of describing poineer life. Not only did she do her research but this story is based on her anscestors and so I felt she put her heart into it. I do wish she would have told more about the years at the end of the book and cut a little out of the middle. I do think the story could have been told in a shorter amount of time as the book is quite long but still enjoyable. I know many of the ratings for this book are low but I feel if you give it a chance you will find it enjoyable. I will be looking for the next book in this trilogy.

About the author:
Helen Bryan is a Virginia native who grew up in Tennessee. After graduating from Barnard College, she moved to England, where she studied law and was a barrister for ten years before devoting herself to writing full-time.

A member of the Inner Temple, Bryan is the author of four previous books: the World War II novel War Brides; the historical novel The Sisterhood; the biography Martha Washington: First Lady of Liberty, which won an Award of Merit from the Colonial Dames of America; and the legal handbook Planning Applications and Appeals. The Valley is the first in a planned trilogy based on her childhood stories of ancestors who settled in Virginia and Maryland before Tennessee became a state.

Bryan resides in London with her family.