Get Me to the Grave on Time by D.E. Ireland - Spotlight and Giveaway 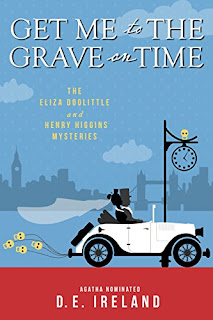 Synopsis
Although Eliza still refuses to marry Freddy Eynsford Hill, everyone around her seems headed for the altar. Not only is her cousin Inspector Jack Shaw about to wed his sweetheart, but Freddy’s younger sister Clara is engaged, along with the niece of Henry Higgins. Another blushing bride is the sixty-year-old Duchess of Carbrey, who plans to marry a handsome fellow half her age. But when the groom is found dead, a jealous mistress is blamed for the murder. However, the death may also be connected to the stolen treasure of an Indian temple.

Disaster strikes next at Jack and Sybil’s wedding. Soon after, the wedding reception of Higgins’s niece takes a lethal turn. Someone is targeting bridegrooms, and the wedding of Freddy’s sister is next. Before another bridal bouquet is tossed, Higgins and Eliza must track down the killer. Otherwise, Clara’s bridegroom – and perhaps the bride herself – may be murdered before they can get to the church on time.

About The Authors
D.E. Ireland is a team of award-winning authors, Meg Mims and Sharon Pisacreta. Long time friends, they decided to collaborate on this unique series based on George Bernard Shaw’s wonderfully witty play, Pygmalion. While they admit the lovely film My Fair Lady and its soundtrack proved to be inspiring, they are careful to stick to Shaw’s vision of the beloved characters from Eliza to Higgins to Pickering and Freddy Eynsford Hill. They’ve also added a cast of new characters to flesh out their own version of events post-Pygmalion. They both have patient husbands, brilliant daughters, and share a love of good books, tea and history.