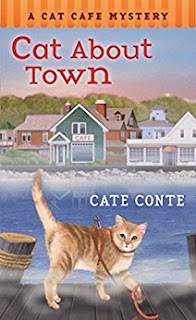 About this book:
The first novel in a frisky new mystery series set in a small New England town, where an unlikely citizen is called in to solve the purrfect crime. . .

Maddie James has arrived in Daybreak Island, just off the coast of Massachusetts, eager to settle down and start her own business—and maybe even fall in love. When a stray orange tabby pounces into her life, she’s inspired to open a cat café. But little does Maddie know that she’s in for something a lot more catastrophic when her new furry companion finds the dead body of the town bully. Now all eyes are on Maddie: Who is this crazy cat-whisperer lady who’s come to town? If pet-hair-maintenance and crime-fighting weren’t keeping her busy enough, Maddie now has not one but two eligible bachelors who think she’s the cat’s pajamas . . . and will do anything to win her heart. But how can she even think about happily-ever-after while a killer remains on the loose—and on her path?

Meet the author - Cate Conde
Cate Conte is the alter ego of Liz Mugavero. Liz is the author of the Pawsitively Organic Mystery series from Kensington Books, the first of which was an Agatha nominee for Best First Novel. As you can imagine, her canine and feline rescues demand the best organic food and treats around. She is a member of Sisters in Crime National, Sisters in Crime New England, Mystery Writers of America, and the Cat Writers’ Association. She currently lives in Connecticut. 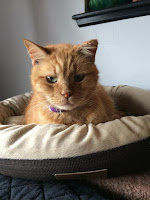 Hello readers! I’m JJ the cat—that’s short for Junkyard Johnny—and I wanted to introduce myself as one of the stars in Cat About Town, the first in the Cat Cafe mysteries. I could argue i’m the star, but I wouldn’t have had the chance if my human, Maddie James, hadn’t saved me from life on the mean streets of Daybreak Island.

Now. One could say none of Daybreak Island’s streets are mean, theoretically. There are worse places to be a stray cat, for sure. The good thing about an island is there aren’t a lot of wild animal predators. There are still mean people and cars, but at least my chances of getting eaten by a coyote is pretty slim.

Still, it’s nice to have a comfy bed to sleep on every night. And to know where my next meal is coming from. I’ve even gotten some fame, as the cat who hits the town on a harness. Of course, stumbling across that dead body attracted more attention to myself than anything else, which is to be expected. I got a big mention in the local news, and people started asking if I could come visit senior centers and nursing homes and wanting their pictures taken with me. Stardom is pretty cool, for sure! And the whole being part of a murder investigation is very exciting, dead body aside.

But the best part is, my new mom really loves cats and wants to help them. I mean, aside from me. Of course she loves me; everyone does. But she really loves my stray friends too. I think once this murder is solved, she’s going to be able to really focus on staying here on the island. That’s the rumor, anyway. I know she still talks about California, but she doesn’t do it with as much passion anymore. And, I heard an anonymous “friend” is trying to steer her toward opening a cat cafe. I think that would be so cool for the island. It’s something new and different and could really help a lot of cats, since all we have to house the rescues is that tiny room at the pound…

But first, we have to get to the bottom of all this crazy stuff that’s going on. Between this nasty guy who ended up dead, and all this drama around Grandpa Leo’s house, and then there’s the guy at the dog grooming shop who Mom totally has a crush on. I have no idea how this is all going to play out. Ah, well. Maybe a nap and some lobster from the guy down the street will help sort things out…

I hope you all enjoy the first book in the series! 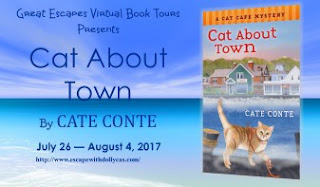