Secrets of the Tulip Sisters by Susan Mallery - Review 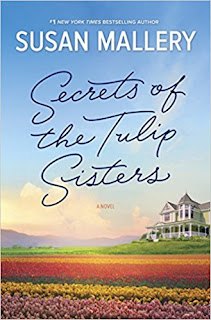 I received a copy of this book free from the publisher

About this book:
From the #1 New York Times bestselling author of Daughters of the Bride comes the charming tale about the problem with secrets, the power of love and the unbreakable bond between sisters

Kelly Murphy’s life as a tulip farmer is pretty routine—up at dawn, off to work, lather, rinse, repeat. But everything changes one sun-washed summer with two dramatic homecomings: Griffith Burnett—Tulpen Crossing’s prodigal son, who’s set his sights on Kelly—and Olivia, her beautiful, wayward and, as far as Kelly is concerned, unwelcome sister. Tempted by Griffith, annoyed by Olivia, Kelly is overwhelmed by the secrets that were so easy to keep when she was alone.

But Olivia’s return isn’t as triumphant as she pretends. Her job has no future, and ever since her dad sent her away from the bad boy she loved, she has felt cut off from her past. She’s determined to reclaim her man and her place in the family…whether her sister likes it or not. For ten years, she and Kelly have been strangers. Olivia will get by without her approval now.

While Kelly and Olivia butt heads, their secrets tumble out in a big hot mess, revealing some truths that will change everything they thought they knew. Can they forgive each other—and themselves—and redefine what it means to be sisters?

Told with Mallery’s trademark heart and humor, the Tulip Sisters are in for the most colorful summer of their lives…

Meet the author - Susan Mallery:
Susan Mallery is the #1 New York Times bestselling author of books about the relationships that define women’s lives—romance, friendship, family. With compassion and humor, Susan keenly observes how people think and feel, in stories that take readers on an emotional journey. Sometimes heartbreaking, often funny, and always uplifting, Susan’s books have spent more than 200 weeks on the USA Today bestsellers list, thanks to her ever growing legions of fans.

Critics, too, have heaped praise on “the new queen of romantic fiction.” (Walmart) Booklist says, “Romance novels don’t get much better than Mallery’s expert blend of emotional nuance, humor, and superb storytelling,” and RT Book Reviews puts her “in a class by herself!”

Although Susan majored in Accounting, she never worked as an accountant because she was published straight out of college with two books the same month, January of 1992. Sixteen prolific years and seventy-four books later, she hit the New York Times bestsellers list for the first time with Accidentally Yours in 2008. She made many appearances in the Top 10 before (finally) hitting #1 in 2015 with Thrill Me, the twentieth book in her most popular series, the Fool’s Gold romances, and the fourth of five books released that year.

Susan lives in Seattle with her husband, two ragdoll cats, and a tattletale toy poodle. Her heart for animals has led Susan to become an active supporter of the Seattle Humane Society. Animals play a big role in her books, as well, as she believes they’re an integral component to a happy life.

What did I think of this book:
I like the general setting of this book - a small quaint town with great characters. It makes me want to spend the day invested in reading the day away. I also like that it takes place around a tulip farm - I think that would be a beautiful place to live. All the colors and smells. The title of this book was rather fitting as these sisters seem to hold a lot of secrets from each other. Then when they did come out there were hurt feelings until they would finally work things out. To me this is how a lot of relationships are so I thought it was a good representation of real life. I liked how the author would throw a bit of humor in the story as well. This was a an enjoyable book and I am glad I took the time to read it.