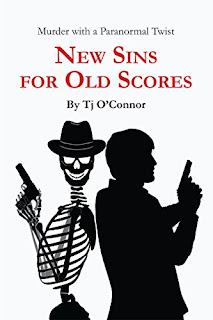 About the book:
New Sins for Old Scores

What this book is about:
Murder, like history, often repeats itself. And, when it does, it’s the worst kind of murder.

Detective Richard Jax was never good at history—but, after years as a cop, he is about to get the lesson of his life. Ambushed and dying on a stakeout, he’s saved by Captain Patrick “Trick” McCall—the ghost of a World War II OSS agent. Trick has been waiting since 1944 for a chance to solve his own murder. Soon Jax is a suspect in a string of murders—murders linked to smuggling refugees out of the Middle East—a plot similar to the World War II OSS operation that brought scientists out of war-torn Europe. With the aid of a beautiful and intelligent historian, Dr. Alex Vouros, Jax and Trick unra0

Meet the author - T.J. O'Connor:
Tj O’CONNOR IS THE GOLD MEDAL WINNER OF THE 2015 INDEPENDENT PUBLISHERS BOOK AWARDS (IPPY) FOR MYSTERIES. He is the author of New Sins for Old Scores, from Black Opal Books, and Dying to Know, Dying for the Past, and Dying to Tell. His new thriller, The Consultant, will be out in May 2018 from Oceanview Publishing. Tj is an international security consultant specializing in anti-terrorism, investigations, and threat analysis—life experiences that drive his novels. With his former life as a government agent and years as a consultant, he has lived and worked around the world in places like Greece, Turkey, Italy, Germany, the United Kingdom, and throughout the Americas—among others. He was raised in New York’s Hudson Valley and lives with his wife and Lab companions in Virginia where they raised five children. Dying to Know is also the 2015 Bronze Medal winner of the Reader’s Favorite Book Review Awards, a finalist for the Silver Falchion Best Books of 2014, and a finalist for the Foreword Review’s 2014 INDIEFAB Book of the Year Award.

What I thought about this book:
This is a new series by this author and I enjoyed it. As you read this book you get little flashbacks of the past which I thought was kind of fun. It was almost like reading two stories at once. I had a hard time figuring out the mysteries but that is ok because it make the book that much better for me. The characters were well developed and fun to get to know. The ghost part of the book was an added bonus for me. I enjoyed the twists and turns of this book. I will be looking for more by this author

Guest Post:
Murder with a Paranormal Twist—But why?
Tj O’Connor

New Sins for Old Scores is my fourth murder mystery with a paranormal twist that plays an integral component of the story. I’ve been asked many times during my travels—Why did you venture into the paranormal with a traditional mystery? The answer is not as easy as you might expect. It’s not that I read paranormal novels—I don’t. It’s not even that I’m a huge fan of the paranormal genre, although I do enjoy the genre, it’s not at the top of my list. It’s not driven from my deep interest in the subject. Nope, not at all.

The truth is I love using the paranormal to connect a historic subplot to a modern day murder. Other authors connect main plot with subplots in different ways. Some use character’s memories or sometimes flashbacks. But in my stories, much of the historic subplot is long ago in history. In New Sins for Old Scores, the modern murder case takes place in 2011 and the historic subplot in 1944. The dilemma in writing these types of timelines is how to connect the stories and have them make sense and not drive the reader mad trying to keep up with the back and forth. Some authors use flashbacks, dreams, or memories in some fashion. Those are great of course, but not for me. Instead, I have one of my characters live those events in history—and it’s especially easy when one of the characters from that timeline is dead. In my earlier series, Oliver Tucker’s Gumshoe Ghost mysteries (I truly hate that moniker), he’s a dead detective who can connect with the spirits of murdered souls from the past. In New Sins for Old Scores, Trick McCall is the spirit of a World War II Office of Strategic Services—OSS—operative who finds himself in 2011. In both cases, the dead characters can traverse the modern day back to the historic subplots. Viola, an interesting means to connect the past and present and add a bit of mystery to the mystery.

Murder, like history, often repeats itself. And when it does, it's the worst kind of murder.

Detective Richard Jax was never good at history. Now, after years as a cop, he was about to get the lesson of his life.

As Jax lay dying after being ambushed at an old inn on a stakeout, he's saved by Captain Patrick "Trick" McCall—the ghost of a World War II OSS agent. Trick has been waiting since 1944 for a chance to solve his own murder and prove he wasn’t a traitor. Soon, Jax is a suspect in a string of murders. The murders are linked to smuggling refugees out of the Middle East—a plot similar to the World War II “Operation Paperclip,” an OSS operation that brought scientists out of war-torn Europe. With the aid of a beautiful and brilliant historian, Dr. Alex Vouros, Jax and Trick unravel a seventy year-old plot that began with Trick's murder in 1944. Could the World War II mastermind, code named Harriet, be alive and up to old games? Is history repeating itself?

Together, they hunt for the link between their pasts, confronted by some of Washington's elite and one provocative, alluring French Underground agent, Abrielle Chanoux. Somewhere in Trick's memories is a traitor. That traitor killed him. That traitor is killing again.

Who framed Jax and who wants Trick's secret to remain secret? The answer may be, who doesn't?

Now, keep in mind that Captain Trick McCall may be dead, and yeah, he might be a ghost, but New Sins for Old Scores is not a ghost story. It’s a murder mystery—it just happens to have a paranormal twist. In essence, the paranormal twist is the connection of the timelines and murders that take place 75 years apart. It’s the vehicle by which I connect the plots and keep the reader understanding the connection no matter the timeline and no matter which murder they are focused on.

Trick McCall, although he’s a spirit, contributes a lot to New Sins for Old Scores. First, he saves Richard Jax. Sure, sure, selfishly saves him. He’s been waiting for him to die at the very spot he did back in 1944 (clearly, Jax survives). In saving Jax, he forms a bond with the living that enables him to investigate both cases and hunt down a decade’s old traitor. Trick can relive his past and communicate with Jax by “sharing him”—we’d call it temporary possession. In these vignettes, Jax is there—in 1944—reliving the events Trick already lived. His detective skills make it possible to find the clues and piece together this 75 year old case of murder and treason in ways that Trick could not. Conversely, Trick’s paranormal abilities help find Ameera, who is an Arab refugee captive in danger, and guide Jax to clues he might not have found otherwise. Together, they weave through the mix of past and present and connect their worlds in one big investigation. Now, Trick is not clairvoyant. He can’t see the killer and solve the case like that. That wouldn’t be any fun at all. No, he’s limited by what he can see and hear and has experienced himself—except by “sharing” others, and that’s a trick all of itself. It’s enough of a skill that it brings an entire new element to the modern murder mystery.

So why the paranormal in a murder mystery? Simple. It’s a unique platform to move between timelines and find clues in a more interesting manner than traditional mysteries. And, of course, it gives my characters an entirely different persona. For me at least in my paranormal mysteries, it’s a fun way to catch bad guys.

For more on New Sins for Old Scores or my other paranormal mysteries, check out my world at www.tjoconnor.com 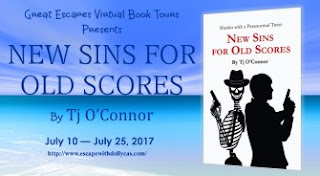