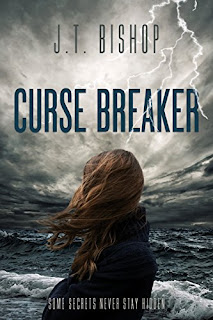 
About the book:
She'll risk her life to break his curse, but revealing the truth could be far more dangerous.

In high school, a friend’s mother blames Grayson Steele for the tragic death of her daughter. Now, years later, Grayson is wealthy and successful, but on the brink of suicide. Because the women he loves are dying. And he can’t stop it.

Knowing about Grayson’s circumstances, Gillian Fletcher derives a plan. Catch the killer who’s making Grayson Steele’s life a living hell. But there’s only one way to do it. She has to be the bait.

As Grayson and Gillian’s plan takes shape, they must not only expose a killer, but also their feelings for each other. The further they go, the more secrets they will reveal. Secrets that will illuminate not just a murderer, but shocking truths that neither may be prepared to face.

Truths that will change their future forever.

Curse Breaker is an Indie Brag Medallion winner and the fourth book in J. T. Bishop's award-winning Red-Line paranormal suspense series. It can be read before or after her Red-Line trilogy. If you love murder mysteries, page turners, and fast-paced stories, then you'll love this compelling book by award-winning author J. T. Bishop.

Other books by J.T. Bishop:

Meet the author - J.T. Bishop:
Tj O’CONNOR IS THE GOLD MEDAL WINNER OF THE 2015 INDEPENDENT PUBLISHERS BOOK AWARDS (IPPY) FOR MYSTERIES. He is the author of New Sins for Old Scores

, from Black Opal Books, and Dying to Know

, Dying for the Past

, and Dying to Tell

. His new thriller, The Consultant, will be out in May 2018 from Oceanview Publishing. Tj is an international security consultant specializing in anti-terrorism, investigations, and threat analysis—life experiences that drive his novels. With his former life as a government agent and years as a consultant, he has lived and worked around the world in places like Greece, Turkey, Italy, Germany, the United Kingdom, and throughout the Americas—among others. He was raised in New York's Hudson Valley and lives with his wife and Lab companions in Virginia where they raised five children. Dying to Know is also the 2015 Bronze Medal winner of the Reader’s Favorite Book Review Awards, a finalist for the Silver Falchion Best Books of 2014, and a finalist for the Foreword Review’s 2014 INDIEFAB Book of the Year Award.