Book description
It’s always been Mimi Rousseau’s dream to open her own bistro, but it seems beyond her grasp since she’s been chased back home to Nouvelle Vie in Napa Valley by her late husband’s tremendous debt. Until her best friend Jorianne James introduces her to entrepreneur Bryan Baker who invests in promising prospects. Now, working the bistro and inn until she’s able to pay it off and call it her own, Mimi is throwing the inn’s first wedding ever.

The wedding will be the talk of the town, as famous talk show host Angelica Edmonton, daughter of Bryan’s half-brother, Edison, has chosen the inn as her perfect venue. Anxious, Mimi is sure things are going to turn south, especially when Edison gets drunk and rowdy at the out-of-towners’ dinner, but by the evening, things begin to look up again. That is until six AM rolls around, and Bryan is found dead at the bistro with an éclair stuffed in his mouth. And the fingers point at Mimi, whose entire loan is forgiven in Bryan’s will.

Now it’s up to Mimi to clear her name and get to the bottom of things before the killer turns up the heat again in A Deadly Éclair, the scrumptious series debut by Agatha Award-winning author Daryl Wood Gerber.

, which she pens as Avery Aames. She will soon debut the new French Bistro Mysteries

and GIRL ON THE RUN.

Fun tidbit: as an actress, Daryl appeared in “Murder, She Wrote.” She loves to cook, and she has a frisky Goldendoodle named Sparky who keeps her in line!


My thoughts
This is a new series by this author and I think she has a hit on her hands. Of course you can't help but be hungry and want to taste the foods mentioned in the book. The author did a good job of describing the setting, it makes me want to visit Napa and see it's beauty. Mimi was a character that I know I am going to like more and more as the series goes on. She is a strong independent woman. The supporting characters were very likable as well. I am looking forward to watching them develop even more as the series goes along and what the author has in store next for Mimi. This author also has a way of keeping you guessing who committed the murder until the end of the book. She likes to drop little hints to make you think you know who it was but then gives you a nice little twist to let you know you were wrong. This is an author that I will get her books without reading what they are about as I enjoy her books that much. I am looking forward to more in this series. 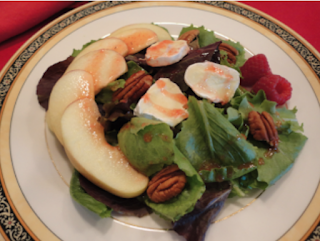 So I’ve been asked how I research my recipes when I make dishes for my foodie mysteries. Well, test, test, test. Taste, taste, taste. Lots of testing and tasting. I’m a cook, but recipes do not always turn out right the first time.

Cooking for the French Bistro Mysteries has really challenged me because French food, as a rule, is not in my go-to diet. Or so I thought. Yes, like lots of people, I believed it was fattening or filled with flour or…

Well, it’s not. Not all of it. And it’s delicious. I have truly had a ball learning a new cuisine.

Sauces, you ask? Don’t get me started. I’m learning the 5 mother sauces of France and how to make many gluten-free. My protagonist Mimi Rousseau learned these sauces as a girl, and that was the moment she fell in love with cooking.

Éclairs, you ask? Yes, I made them. And I made them gluten-free. Whee!! They were delicious! The custard inside the éclairs is delicious and can be served alone. Fun, right?

But let me repeat: test, test, test. I test and I tweak to make sure that the recipe going into the book is good. No, not just good—great. Is this recipe in the book? Nope. It just has Brie in it. Isn’t that deliciously French enough?

Bring the Brie cheese to room temperature (about a half hour).

Meanwhile, puree the raspberries and strain them through a wire mesh sieve (to remove all those pesky seeds). Combine the berry puree, honey, vinegar, kosher salt, white pepper, and orange juice in a bowl and whisk while slowly pouring a steady stream of the olive oil. Taste to check seasonings. Adjust the spices if you think they’re needed (mine was just right), then set the dressing aside.

Place a handful of greens on 8 plates. Quarter the apples and remove the core. Slice the apples into ultra thin pieces (a quarter apple per serving), arrange on top of the greens. Slice Brie and lay three to four slices on each salad. Drizzle with the raspberry vinaigrette and garnish with the toasted pecans and extra raspberries, if you have some.

Note: Apples
I used Ambrosia, which I discovered is a relatively new cultivar originating in British Columbia in the early 1990s. It is medium to large in size and has mostly red coloration mixed with lovely yellow. It is firm and very sweet, reminiscent of pear.


From Daryl:
I’m offering a book giveaway (winner’s choice of 1 from my published paperbacks) every day of this traveling feast. To enter today, tell me—what is your favorite salad dressing?

BY THE WAY, don’t miss out on the French Bistro-themed BOX I’m giving away on my Facebook Author page. Link below.
Facebook: Daryl Avery