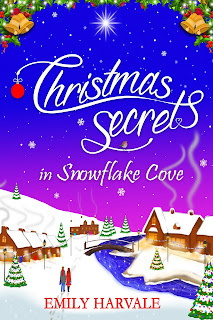 Christmas is a time for family and friends, miracles and magic, falling snow and roaring fires, fun, laughter and festive feasts. In Snowflake Cove, it’s also a time for secrets to be revealed…

Evie Starr is hoping for more than a sprinkling of magic this Christmas. The family-run Snowflake Inn is virtually empty and the Starr’s financial future isn’t looking bright. But Evie’s gran, Jessie has a secret that might help.

Enigmatic, Zachary Thorn is every woman’s dream. He’s also ex-SAS, so his secrets are classified. The Christmas Special of his feel-good, TV show is set in Michaelmas Bay – until a phone call means he’s spending Christmas in nearby Snowflake Cove.

Evie’s best friend, Juniper thinks boyfriend Darren has a secret. Evie knows he does. And Evie’s niece, Raven is hiding feelings for Juniper’s brother – who has a secret crush of his own.

But the biggest secret in Snowflake Cove is the identity of Raven’s dad.

With snow falling thick and fast and secrets being revealed one after another, will everyone be snuggling up by the fire on Christmas Eve, or are some secrets best kept hidden…?

Meet the author - Emily Harvale
Having lived and worked in London for several years, Emily returned to her home town of Hastings where she now spends her days writing... and chatting on social media. Emily is a Member of the SoA, a PAN member of the RWA and a Pro Member of ALLi. She's an Amazon bestseller and a Kindle All Star. Emily loves writing and her stories are sure to bring a smile to your face and a warmth to your heart.

Emily says, "I write about friendship, family and falling in love. I believe in happing endings." When she isn't writing, she can be found enjoying the stunning East Sussex coast and countryside, or in a wine bar with friends, discussing life, love and the latest TV shows. Chocolate cake is often eaten. She dislikes housework almost as much as she dislikes anchovies - and will do anything to avoid both.

My thoughts
This was a nice book to read at the beginning of the season. I loved the names in the book as they connected well with the title and theme. I don't know if I would have handled the snooty woman as well as Evie did but she knew she had to as she is trying to get the word out about her business. This was a I can't put down type of book as I really wanted to figure out the secrets that were hidden throughout the story line. The author also added in a little humor to the story. She did a good job with her descriptions and developing the many characters. I want to go to Michaelmas Bay and stay in Evie's resort. I look forward to more books in this series.